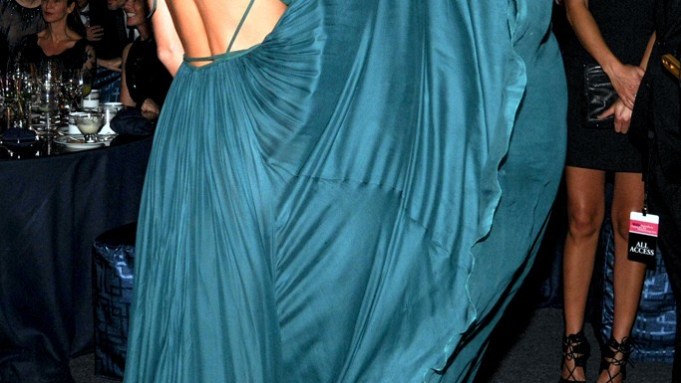 “We walked in behind the wrong couple,” said Monique Lhuillier of the flashbulbs that greeted the rocker couple in the narrow entryway to the courtyard. After cocktails, guests were ushered into the theater for the inaugural performance, which took place in two shifts to accommodate the huge crowd.

Liz Goldwyn, who brought her older brother Tony, suddenly found herself surrounded as they exited the theater. “I’m trying to usher him along, but everyone keeps stopping him because they want to know about the president,” she said of his huge following of “Scandal” fans.

Inside the dinner tent, which was set with a dramatic blue and black color scheme, there was a crush at Wallis Annenberg’s table, where she was seated next to Theron.

“I was here in May and this was a construction site. I can’t believe how quickly it went up. The Italians could take a few lessons from Beverly Hills,” said James Ferragamo, who had a plum seat between Camilla Belle and Freida Pinto, both clad in petal-pink Ferragamo gowns (the house was presenting sponsor for the gala, and clearly had first dibs on dressing the PYTs of the evening).

Alessandra Ambrosio, Angela Lindvall and Karolina Kurkova were among those who mingled over the first course then got up to walk in a Salvatore Ferragamo spring 2014 runway show that included a few bonus looks specially designed for the occasion. “We’re gonna show them how it’s done in L.A.” said Ambrosio, perhaps referring to the dearth of runway models in Tinseltown.

Then Italian tenor Vittorio Grigolo took the stage, dedicating an aria from “Tosca” to Luciano Pavarotti and performing an encore that brought the crowd to its feet, his last number timed to the defilé. “We Italians put our hearts into everything we do,” he said.