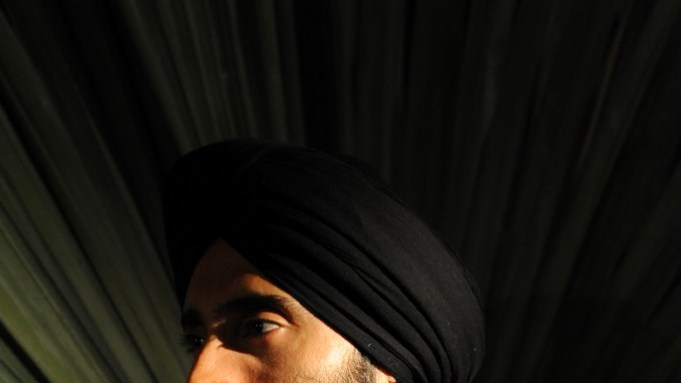 Forevermark, a diamond brand from the De Beers group of companies, launched its newest campaign, “The Center of My Universe” on Tuesday night with a cocktail party co-hosted by Waris Ahluwalia at the National Arts Club. A jazz band was on hand for the fete, as well as a bar that served only Champagne and, a bartender added gruffly, “water.”

The campaign celebrates the idea of “a woman as the emotional center of those around her,” according to Forevermark press materials. In an almost sci-fi touch, the stones are inscribed, at 1/20th of a micron deep, with a Forevermark insignia and an individual number invisible to the naked eye.

“Well, you know the two things that always inspire me are love and history,” Ahluwalia said amid greeting guests like Sophie Theallet, Bibhu Mohapatra, Marco Brambilla, Bill Powers and Cynthia Rowley and leading them to a glass vitrine, holding the pendant he had designed for the occasion. The 14.58-carat oval Forevermark diamond radiated gold and pavé spokes and rested atop a pile of first-edition ornithological texts.

“[Forevermark] said they were doing something on ‘center of my universe,’ and they just said that and ‘Make something nice for us,’ and that’s what I did,” Ahluwalia explained. “The idea behind a Forevermark stone is rarity, beauty and that it is responsibly sourced — and that goes along with everything I believe in. I source everything responsibly… from my shoes to my eggs, it’s a way of life for me.”

Olivia Chantecaille, Yigal Azroüel and his fiancée, Laura Vidrequin, peered over Ahluwalia’s shoulder at the case. The designer snapped a photo of the piece on his phone. Casey Neistat kept his hands very carefully folded in front of him as he surveyed the pendant.

“I’m just so tempted to try and lift the case off to see what happens,” Neistat grinned. “In fact, I’m probably going to leave soon to ensure that doesn’t happen.” Darshan Ahluwalia was wearing several of her son’s pieces from his House of Waris line as she greeted guests in the foyer. Toward the back of the building, Forevermark had whitewashed a room and lined it with large placards touting the brand, as well as a case of jewelry for guests to try on, guarded by a brand representative and a pair of men in black suits.

“Do you think this is a little much?” one guest asked of a pair of large diamond stud earrings.

“Why have less when you can have more?” the representative trilled, which brought to mind another question: How much was the pendant Waris had designed?

“It’s a little under $2 million,” Ahluwalia said before leaving for the after party at Amy Sacco’s No.8, adding, “I will hand-deliver it to whomever buys it. That is a promise.”