The duo hosted a dinner celebrating the photographer and filmmaker's fifth and most recent book, “Flower.” 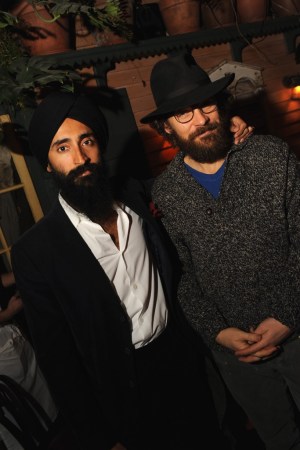 New York-based photographer and filmmaker Andrew Zuckerman is obsessed — with beauty, with time, with music, with animals and most recently, with flowers.

“A lot of my work is about a thorough investigation of a subject, and the aim is to transfer something from the natural world to a two-dimensional space in a neutral and democratic way,” he said, at a dinner celebrating his fifth and most recent book, “Flower,” hosted by friends Waris Ahluwalia and Peter Sarsgaard at The Waverly Inn on Tuesday night. The restaurant’s garden room felt increasingly smaller as guests like Maggie Gyllenhaal, Glenn O’Brien, Graydon Carter, Mickey Boardman, Aaron Young and Scott Campbell mingled over Champagne before taking their seats.

Zuckerman, who keeps a studio in Chelsea, is known for his stark, minimal photographic style — his latest effort, “Flower,” contains hyper-real images of 150 flower species decontextualized from their environment. His previous books in the same vein include “Creature,” “Bird,” “Music” and “Wisdom,” a series of 50 portraits.

“One of the issues [with flowers] is that they’ve stood for everything but themselves,” Zuckerman said. “They’re generally used as a metaphor for something else, [e.g.] Robert Mapplethorpe’s use of them sexually, and Georgia O’Keeffe in the same way. But for me it’s about this sort of taxidermy, transferring something from the natural world in a way that it’s about the subject — not what surrounds it.

“A total failure would be if someone looked at a picture of mine and said, ‘Oh, this is a gorgeous image,’” he continued. “I really want them to look at it and say, ‘That’s an incredible flower.’”

Ahluwalia had just returned from Art Basel. “I think there were 50 percent more parties this year, which had the adverse effect on me, so I cut down,” he said.

Sarsgaard, who spent a while catching up with artist Dustin Yellin, said his favorite thing about Zuckerman’s work, not surprisingly, was “the obsessiveness of it.”

“Everything he does, he does so full-on,” he continued. “When I first met him and he was starting out, he put everything he had into it. His whole life, every hour, every dollar that he had, every credit card maxed. And it’s a daring quality. Especially when you look at this work — these still lifes. What’s so daring about a still life, one might ask? Well, it’s daring to do a book of still lifes. It’s daring to do a book of flowers. This man is obsessed with flowers.”

Sarsgaard revealed he’ll have an upcoming role in a Western, which starts shooting this Feb. He gestured to his hair, which was, perhaps, a tad overgrown.

“I’m thinking if I just keep all of this going, I’ll be the hairiest actor that there’s ever been.”