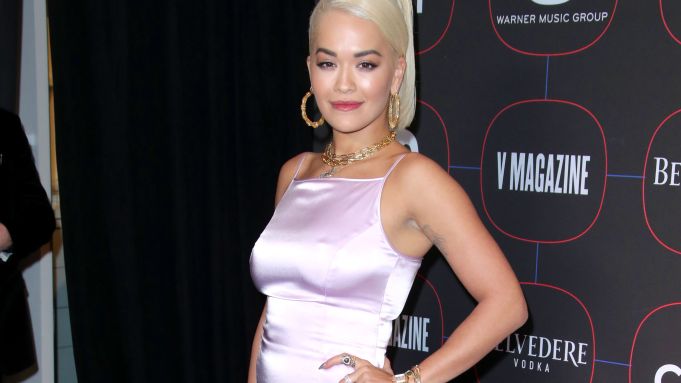 As pre-ceremony fetes began to pop up around the city on Thursday night, the Grammy Awards were officially welcomed back from New York to Los Angeles as though they never left.

Among the first to help the ceremony get back into a West Coast rhythm were nominated artists Dua Lipa and Nipsey Hussle; who were both tapped to headline their label Warner Music Group’s annual bash, thrown with V magazine, with performances.

Arriving early to the black-carpet affair was this year’s most nominated woman, Brandi Carlile.

“It’s an unbelievable feeling,” she said of her six nods. “It’s an accolade and an honor that’s unprecedented. I have never experienced anything like it in my life.”

Although mum on her day-of look — “It’s going to be white and sparkly” — the folk-singer was verbose about the inspiration for her album, “I Forgive You.”

“Well, I had been on the road with [Phil and Tim Hanseroth] for the better part of 15 to 18 years and we do a lot of playing gigs in the summer time; beer garden-type, party songs. I started to really notice that the up-tempo songs made everybody get up and sing and clap and have fun.”

She continued: “I’m really prone to erring on the side of the entertainer more than the creator and the [presidential] election shook me in such a way that I wanted to step out of being an entertainer and dig deep and mine my soul and ask these guys to mine their souls about things we maybe hadn’t reconciled, people we hadn’t forgiven, concepts that were deep within us, such as institutionalized and internalized homophobia, racism and sexism. Conceptually, that’s what brought us to that album ‘I Forgive You.’ To be seen this way, that’s where the reward is for me.”

Awards-season newcomer Milck, who gained popularity after her song “Quiet” became a sensation during Washington, D.C.’s Women’s March in 2017, was also on board to talk about issues close to the heart.

“Coming from zero idea of how to be signed in the industry to [being signed to] Atlantic is a feat I’m proud of,” she said. “I want to keep representing the Asian-American female voice and really tell my story. I feel very pulled to speak about my background and how Asian-American women can be perceived a certain way. It’s important to break those stereotypes of us being demure and quiet. I think there are so many different sides to any different color of human being. We have a lot of storytelling to offer that can help save lives and comfort others, so that’s a huge big reason of why I do what I do.”

Also on the scene was Evan Ross, who showed up in support for Lipa and Hussle.

“I’m excited to see Dua Lipa, who is a friend of Ashley’s. I love her music. And Nipsey Hussle. It’s what he talks about, but also what he’s been doing around Los Angeles is really special,” the singer said of the L.A.-based rapper’s efforts to save the Mid-City World on Wheels after threat of closure.

When it came to the actual party, guests such as Rita Ora, Hailee Steinfeld, Mahalia and Larsen Thompson danced in between sets from Dua and Hussle and grazed on mini-cheeseburgers, fries and oysters.

“I am having so much fun,” said Ally Brooke, formerly of Fifth Harmony. “I’m running into some friends and making new ones. I love that we’re here just celebrating music.”

To All the Boys in the Tom Ford Front Row