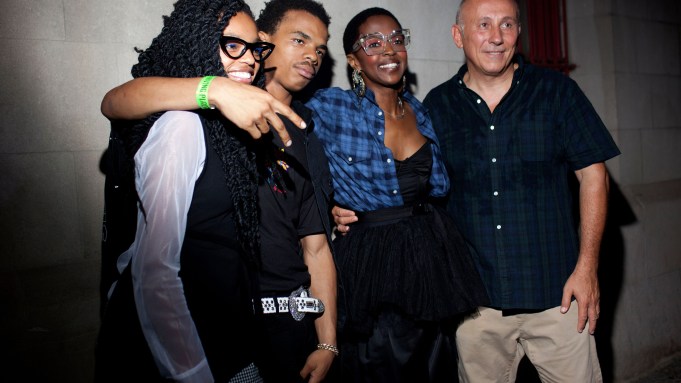 Lauryn Hill fans packed TriBeCa landmark building DCTV on Wednesday night, and they all had Woolrich creative director Andrea Canè to thank. Ms. Hill is one of the faces of the brand’s recent campaign, along with experimental jazz band Onyx Collective, and they had all come out to perform.

“I think we’re the other side of the coin that Lauryn has. We’re a nice tails to her heads. We’re coming up right behind her with hits, classic hits, soul music,” said Onyx Collective member Julian Soto, who was wearing a pair of Woolrich plaid pants.

The best part of wearing Woolrich?

“We got to pick them,” he said, and next to him Isaiah Barr — also wearing a pair of the brand’s pants — expounded upon the thought. “I love being somewhat connected with this guy,” said Barr, glancing to Soto. “So the fact he’s in blue, and I’m in red, and we’re both in women’s pants, makes me feel connected.” The band, who had just performed, is doing a dinner later this week and then another dinner in Milan — and will be hanging out with pal Virgil Abloh somewhere along the line.

Someone with a headset appeared with a great deal of urgency.

“Lauryn Hill’s going on,” he said. And with that, the band jostled downstairs to bop along with the main event. Hill also made it a family occasion, bringing 16-year-old son Josh Marley onstage for three songs. (Daughter Selah Marley was also onstage, capturing the whole performance on her phone.)

It marked Canè’s second Hill concert. “I’ve seen [her] only once, in Italy. I’m an old school guy,” he said, adding that it was almost 20 years ago; Hill is in the middle of her 20th anniversary “The Miseducation of Lauryn Hill” tour. How do the two performances compare? “I think in terms of energy, very similar. She’s still very strong, and her voice I think is even better now — time passes for everybody, but I think she’s great and she’s very similar to that time, the energy, the feeling. She’s very intellectual.”

Nathan Stewart-Jarrett and Danai Gurira were later arrivals, having made their way downtown from the Thom Browne dinner uptown at Barneys New York.

“I didn’t catch as much as I’d [like], [but] I caught a really awesome amount,” said Gurira who, like Canè, was seeing her perform live for the second time. “I saw her perform two years ago in Atlanta, and she’s incredible, always. Every time I hear her, I hear more complex musical power,” she said. “Many of us grew up on that album, it was truly our lifeblood growing up. And watching her out there doing her thing — I was a young girl watching her be such a powerful confident voice, speaking truth to power and speaking experiences we don’t often hear articulated. She has just always been such a force, and such a powerful figure for me and for black girls, for women, for everybody.”