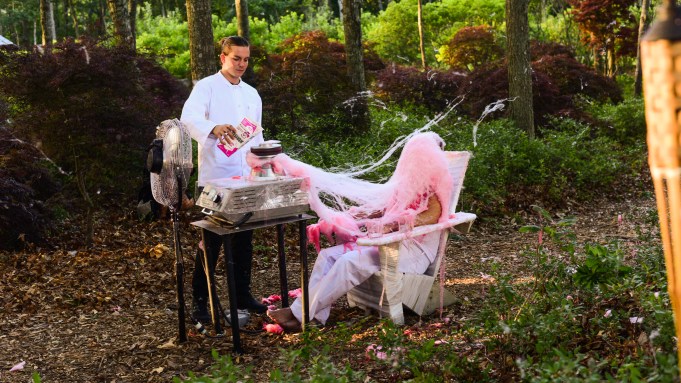 “Next year, my art will be worth more,” mused one of the many guests lined up on the side of Water Mill Road on Saturday evening. She had more skin in the game than most, presumably one of the many artists who had donated work for the Watermill Center benefit’s silent auction. “They choose it — if it doesn’t sell, it’s their fault.”

A few minutes past the official 6 p.m. start time, guests made their way up the steps — underneath canopies of naked bodies — and through a room of stones to emerge into a backyard performance art extravaganza.

“I come to Water Mill every year, it’s one of my favorite summertime events, and I’ve come to love and enjoy this,” said Maxwell Osborne, taking in the tiki torch-lit entrance. “For me, it’s this part — the walk in is the most exciting, because every year it changes. You’re always wondering what will come next,” he added. “It’s always thought-provoking. For me it’s really inspiring just in general.”

On the grounds of the arts organization, it was business as usual for the annual benefit, one of the summer’s most-hyped Hamptons parties. Performance artists were dispersed through the woods, stomping on metal risers, dancing on stages, dangling from the trees and wearing hooves. Farther down the path, wisps of pink cotton candy floated through the air, debris from Stephen Shanabrook’s performance piece in which he was being covered in cotton candy with the help of a fan and cotton candy machine. Nearby, a woman was smashing a hammer into a wall as guests sat in folding chairs watching the fruitless demolition effort.

“It’s a little bit risque, we have two teenage children so we don’t bring them to this one,” said Polina Proshkina. “But it’s always interesting, provocative and puts you outside of your comfort zone.”

This year’s benefit, “Fly Into the Sun,” honored Laurie Anderson, who performed after dinner; French actress Isabelle Huppert, and the late Lou Reed. The dress code was “dark shiny matter,” which guests interpreted either liberally or not at all.

“Dark and shiny did not work for me, so I took the theme of flying into the sun,” added Proshkina, who’d chosen a neon yellow ensemble for the event. “I decided to concentrate on the heliocentric aspect of that, so this is more sun related.”

The silent auction artwork was displayed in a labyrinth surrounding a naked woman, who was busy painting a giant mural on the canvas-lined ground. Patrons who were feeling creatively inspired could grab a spray can from a red wheelbarrow and graffiti a large wall. The other side of the wall, which no one opted to paint over, proclaimed: “She Outwits Him; She Outlives Him.”

Nearby, Karma executive James Taylor was stationed by two of his fire red luxury cars, taking in the scene. Performance artists leaned out of the driver’s seats.

“To have a chance to get in front of a near thousand or two eyeballs who are in our kind of market in a bit of a different setting,” he explained of the company’s sponsorship of the event. “I was sort of warned it might be a little out there and a little too provocative so I was being cautioned — and it’s fine,” he added. “The guy hanging from the chains — OK, that’s a little different, but that qualifies as real creative. The girl in here painting, the nude lady, OK. So what? You see the people in the little black huts who are willing to put it out there. Overall, it’s not as bad as I was warned.”

Artists, that sounds like a challenge for next year.