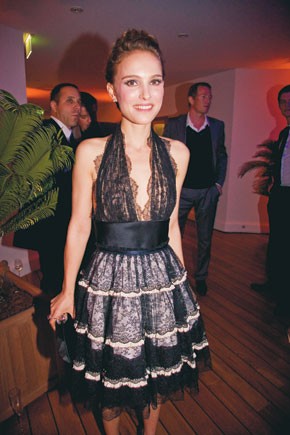 CANNES, France — The must-have accessory in Cannes this weekend was an umbrella as torrential downpours played havoc with red-carpet dressing.

Among those braving the rain-soaked Pegasus yacht on Friday for a cocktail party Margherita Missoni and Quintessentially threw to benefit OrphanAid Africa were Eugenie Niarchos and Tatiana Santo Domingo. A barefoot Jade Jagger said she had her wet-weather wardrobe all figured out: “It’s a good thing I brought so many long dresses.”

The next night, nothing could dampen the spirits of Jeanne Moreau, who was being feted for her 60-year career at the swanky Majestic Beach. The august actress opted for a custom-made Pierre Cardin gown. “I have one in coral, purple and black and white, he made them for me especially,” said Moreau, who had only optimistic thoughts on her anniversary. “I wish that everything ends well for everyone.”

The Vanity Fair party at Hotel du Cap-Eden Roc later that night was full of stars, even if the cloudy sky wasn’t. As guests crowded onto the covered seaside terrace, Harrison Ford and Will Smith entertained onlookers by performing an impromptu dance routine. “We didn’t even practice,” said Smith, who insisted that he enjoyed the inclement weather. “My wife likes to say that it’s because it’s the opposite of my personality, but I love it,” he said. “It makes me feel all warm and sexy.”

His dancing partner denied having any butterflies about the opening of his much-hyped “Indiana Jones” sequel the next night. “It’s a holiday being here,” said Ford, leading his squeeze Calista Flockhart to a less crowded spot.

As partygoers nibbled on marshmallow-filled candy roses, Diane von Furstenberg caught up with her campaign model Natalia Vodianova and couples like Mick Jagger and L’Wren Scott, Adrien Brody and Elsa Pataky and the on-again Sean Penn and Robin Wright-Penn and mingled at the bar.

Meanwhile, Olivier Theyskens, in town for one day to do fittings, lamented the rain. “I’ve seen a few mermaids with all these long dresses trailing in water,” he joked. As for Valentino, he said he didn’t miss dressing actresses. “I’m very flattered when people say that they miss my dresses, but I have always said it’s better to leave when the room is full of people,” said the designer, who’s busy working on his own film, a documentary set to open at the Venice Film Festival, and a retrospective opening at the Musée des Arts Décoratifs in June.

Fellow designers Domenico Dolce and Stefano Gabbana discussed their own party plans for this Friday night, a Dolce Vita bash for Naomi Campbell’s 38th birthday, where Lindsay Lohan will be DJing. “It’s all about the right mix of people,” said Gabbana, who is expecting Bono, Sharon Stone and Kylie Minogue.

Meanwhile, Christian Louboutin — sporting neon yellow Converse high-tops — burned up the dance floor with Lily Allen, a brave Brit indeed. “I even went for a dip in the sea the other day. It was freezing,” she said.