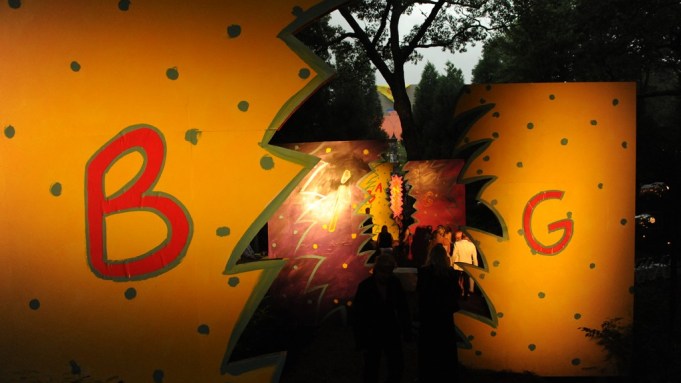 Oscar Wilde’s maxim, “you must either be a piece of art or wear a piece of art,” usually carries undue weight with the crowd who flocks to the Watermill Center for its summer benefit — but by the time the 19th annual outing rolled around on Saturday evening, a serious storm had taken up residence over the Hamptons. It seemed that sartorial satisfaction would have to be put aside in favor of survival. The weight most partygoers were concerned with was from water.

Guests like Jay McInerney, Cindy Sherman, Rufus Wainwright, Arden Wohl and Dorothy Lichtenstein parked their cars and ran along the torch-lit path through the wooded area up toward the center, dodging the low-held umbrellas of other patrons, ducking and weaving through large painted boards — which looked like panels from a comic strip — that spelled out (a word per board) “the Big Bang.” Waiters in white jackets collected the guests in weather-inappropriate footwear and led them by the elbows across a covered courtyard full of now water-slicked boulders. The effect was akin to crossing a lake bed somewhere particularly mountainous — in cocktail attire.

“So, this dress will be ruined,” Lauren Remington Platt sighed of her hem, heading off toward the crowd clotting near the bar.

Robert Wilson was on hand in his trademark ensemble of black shirt and khaki slacks. “It’s a beautiful show — never mind the weather,” Wilson said cheerfully, encouraging guests to head for the performance works in the woods as lightning creased the sky. Harry Brant and Michelle Harper studied the best way to cross to the dinner tent sans umbrellas. “I could just push this down,” Harper suggested of her small beaded headpiece while winding her black coat over her shoulders. “Don’t,” Brant admonished. “We’ll wait; we’ll get one of them to come back and take us over.” The pair peered through the rain, signaling wildly at a passing umbrella-wielding waiter.

Inside the center’s main building was a tribute exhibition to artist Mike Kelley, who committed suicide in January. A video entitled “Superman Recites Selections From ‘The Bell Jar’ and Other Works by Sylvia Plath (1999)” played in the entry while four small television screens on an adjacent wall showed various jars of crystals in jewel-colored liquids, swirling and foaming with titles such as “The Swelling Seafoam and Mint Swamps of Mushroom Promontory” and “The Crawling Saffron Slimes of the Unicorn Consort of Satyr Mountain.”

Kelley had worked closely with other artists represented at the “Big Bang,” including Paul McCarthy, who had erected a monumental black inflatable work at the center of the grounds, which was titled, rather succinctly, “Butt Plug.” Photographers for the event scurried around it, like a perverse maypole, looking for subjects not too soggy or umbrella-obscured to shoot.

To the right of McCarthy’s quivering inflatable centerpiece was a stage on which Kembra Pfahler and the Voluptuous Horror of Karen Black (nude women painted a variety of garish colors save a pair of lace-up thigh-high leather boots) cavorted around a 10-foot-tall phallus sculpture of a matching hue. During the cocktail hour the troupe ran it through the woods and back to the stage, where it was erected as they solemnly paraded away to a recorded crescendo of cymbals and crashing glass. At the center of the tented structure (where the items for the live and silent auctions were hung) was an open air courtyard, where, diagonal from a William Wegman photograph of a Weimaraner dolefully aboard a StairMaster, a woman dressed in a long-sleeved, high-necked dress fit for a Regency period drama rollicked in a pit of mud about the size of a wrestling circle. The piece was called “Circuitous Graze.” The artist, Janice Lancaster Larsen, beamed upward into the deluge as she flung herself back and forth, easily the most pleased about the conditions.