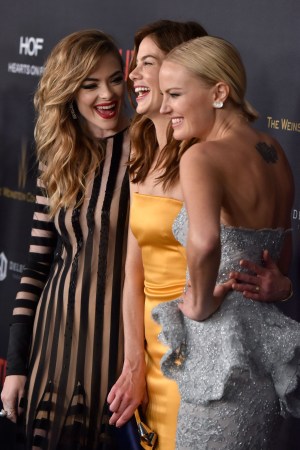 “I love Harvey because he’s always supported me,” Chanel Iman gushed. “The energy is alive and the music is good. This is the spot to be at,” the model said. She was one of the first to showcase her moves on dance floor as well as first to arrive hours earlier for the viewing party, where the editors of Marie Claire, who sponsored the bash, attempted to win the voting pool.

In a far-off corner behind heavy security, Katy Perry and Orlando Bloom were seen sharing a laugh in Weinstein’s sectioned-off booth while at a neighboring table America Ferrera and Mia Moretti chatted the night away.

Although the DJ played “Let’s Dance” as an ode to the late David Bowie, there were a few who spent much of the evening sitting down, such as Aziz Ansari, Jonah Hill and Andy Samberg, who shared a couch for most of the night.

As she posed for a quick photo with Uzo Aduba and Taryn Manning, “Orange Is the New Black” star Taylor Schilling noted, “It’s all good; now that I’m with my crew, the party is amazing.”