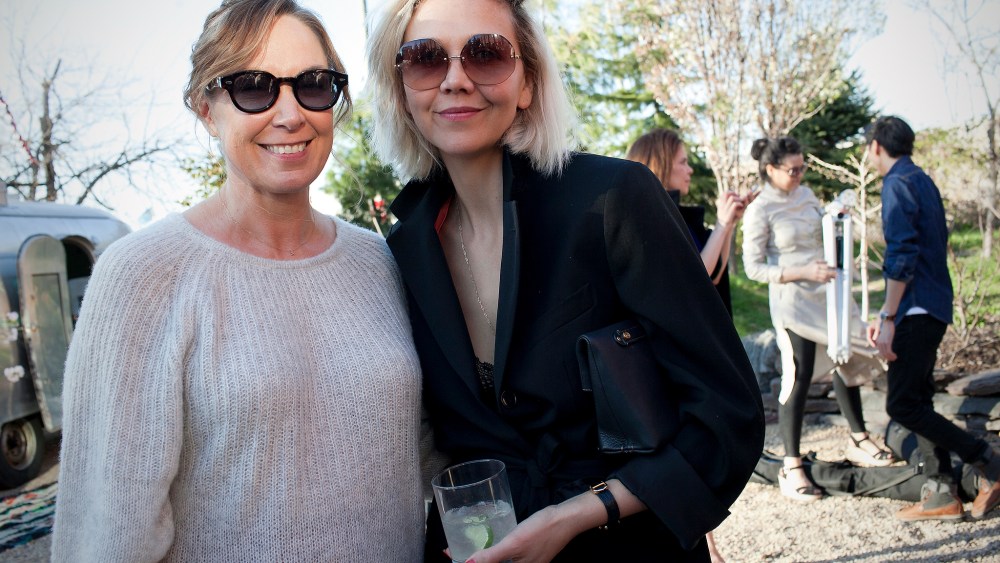 Think your week ahead is looking busy?

“Tomorrow I’m flying to Moscow, doing a third round of conversations on camera with Mikhail Gorbachev — I’m doing a film on him. And from there straight to the Peruvian jungle by the end of the week for a workshop with young filmmakers,” said Werner Herzog. “So it’s kind of crazy.”

The director was hanging out with Dustin Yellin in the garden at Pioneer Works in Red Hook, Brooklyn on Sunday afternoon, where the art organization’s fifth annual Village Fete benefit was under way.

“Dustin somehow dragged me into this, and I’m very pleased…we actually met for the first time two days ago,” said Herzog, the evening’s artist honoree. “[Pioneer Works] is an amazing thing — I didn’t know about it until very recently. It’s totally wonderful, it’s how things should go. I think it’s very, very good for the entire city and the entire area — when I speak of the city, I mean, of course, Manhattan, but I [also] mean Brooklyn, the entire landscape of mind.”

Nearby, a solar telescope offered guests an opportunity to get a glimpse of a different landscape: the sun. “If you look closely, you’ll see a black dot in the upper left — it’s a sun spot,” offered the man stationed nearby, before hyping up the view of the moon that would be available later.

Local Red Hook resident Michael Shannon, who has worked with Herzog three times, was tasked with introducing the director during dinner. “I’ll talk about Werner in front of everyone tonight. I don’t want to burn myself out,” said the actor, stepping in to block the path of the blinding late-afternoon sunlight. He praised Pioneer Works, noting that the building is a lot closer than the Metropolitan Museum of Art. “Dustin’s real nice to my kids. They come over and he helps them make art and paint and stuff.  You know, with the arts education always on the chopping block federally, budget-wise, what Dustin’s doing is very virtuous I think,” he added.

For artist Nate Lewis, who worked as an intensive care registered nurse for nine years in D.C. before moving to New York for the Pioneer Works residency, the organization offered him an alternative route from a traditional MFA program.

“It was everything I needed, and everything I thought could have happened, happened, and more. It was a game-changer. I owe you everything Pioneer Works,” he said, pressing his palms together in the direction of the building.

The crowd meandered inside the red brick building to sit for dinner, where they were met with bundles of sage and a pack of matches; the night was punctuated by the smell of intermittent smudging, a nod toward this year’s benefit also falling on Earth Day.

“I ask people all the time, what are the things facing our planet, what are the issues? And you hear the same things: socioeconomic inequality, the nuclear issue, ecological disaster, which we’re right smack in the middle of,” Yellin told the crowd from a raised central platform in the room. “If we as a species do not come together, nothing will be fixed. The sciences and the arts seem to be a fantastic glue — they bring everyone to the table unarmed and ready to love each other.”