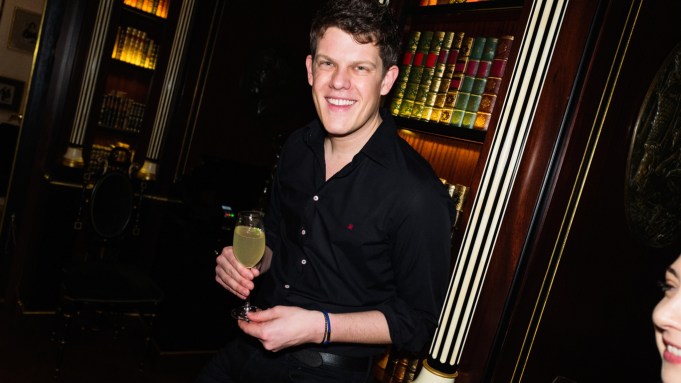 Carolina Herrera creative director Wes Gordon and model Grace Elizabeth Harry Cabe hosted a cocktail Friday night to celebrate the brand’s fall 2019 collection. It was held in the library of La Réserve Paris hotel, which was festooned with flowers that also sprang up on headbands created by artisan Lily Griffiths adorned by many guests.

“It’s a little bit of summer in March,” said Gordon. “The flower crowns and apéro spritzers — so very Herrera, summer all year round.”

Gordon said he has two loves while in Paris. “I love to stay in my hotel room,” he revealed. “There’s nothing more decadent when you are in Paris than to stay in your beautiful hotel room and have room service. Then the other thing I love to do is walk.”

Often, Gordon meanders down Rue Saint-Honoré, cuts through the Tuileries gardens, across the Seine river and wanders around Rue de Lille and Boulevard Saint-Germain.

Cabe was in Paris to model for many a fashion brand. “I’ve walked six shows so far in Paris, and I have two — possibly three — left,” she said. “I look forward to the Chanel one.”

Following Paris Fashion Week, Cabe has some magazine covers coming out, though stayed mum on details. “I’m going to China for a beauty brand that I’m signed with, for two weeks in April,” she continued.

Actress Melissa George just wrapped a TV series with Sean Penn, called “The First.” “That was such a highlight for me career-wise, because he is such a great actor,” she said. “I played his wife and lover of 18 years, Diane Hagerty.

“What else? I have something coming out on March 7, but I’m not allowed to [say],” added George, who did give a one-word hint: “Trek.”

Harley Viera-Newton was another guest at the cocktail who shared her favorite thing to do in Paris. “It’s definitely vintage shopping,” revealed the model-DJ-turned-fashion-designer. “I love all those vintage stores where they charge you by the weight of the clothes. You have to really commit to it and really dig, but I’ve found some gems that I’ve worn for a decade now from Paris trips.

“I really love those where you have to get messy and get in it. I feel especially for fashion week, the more curated vintage shops are very picked through, so it’s tough to find stuff. Whereas that’s where you can still score,” said Viera-Newton, who was in town showing her HVN fall collection.