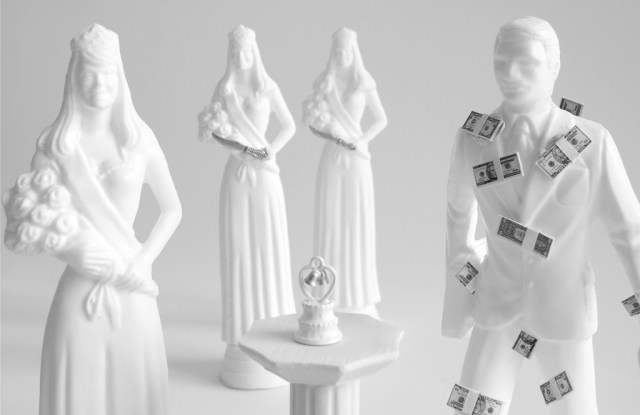 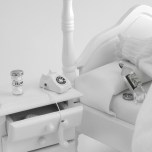 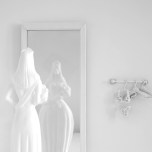 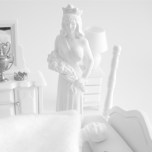 HONG KONG — Well-heeled expatriates packed into a gallery here Wednesday to fête New York artist Rachel Hovnanian on her first solo show in Asia, a tongue-in-cheek take on the pressures of beauty, marriage and domesticity.

The exhibition, which runs through April 15 and comprises over a dozen photographs of miniature figurines from Hovnanian’s 2010 series “Too Good to Be True,” kicked off with evening cocktails and canapes. The dozens of attendees and potential buyers included those working in fashion, finance and the creative industries, many of them Australian, New Zealand, British and American transplants.

The eerily pristine images in black and white featured statuettes of beauty queens in different scenarios — staring at a case of glazed doughnuts, watching over a husband as he slumbers in bed with golf clubs, standing amid a pile of silver pots and pans.

The Texas-raised artist, who was in town for the opening, noted that many women did not like their bodies and that in Hong Kong, it appeared the pressure to be beautiful was no different. “There is definitely a presence of that here, with all the ads for beauty products,” she said.

Hovnanian spent the evening mingling with guests at the space, in Sheung Wan, a district where decades-old shops selling seafood and Chinese medicine stand next to newer art galleries, cafes and antique stores.

It was, perhaps, not all that surprising that many had showed up. “I recently opened a fortune cookie and it said: ‘Many will come to hear you speak,’” the artist joked.

It is a busy few months for Hovnanian. On May 2, her exhibition titled “Mud Pie” opens at the Leila Heller Gallery in New York.

Given the chatter and intermittent laughter in the room, the humor and meaning behind Hovnanian’s work probably were not lost on the crowd — not, at least, on Amber Long, a director and curator at Australian multibrand accessories retailer Jean Brown, and Ruthann Bowers, a director at Options Group, an executive search and consulting firm. Both took note of it. Peony Mak, an account manager at advertiser DDB said the theme of the beauty contest was clear from the start.

Jennifer Zhu Scott, who runs a U.S. market intelligence firm in the region, snapped up two pieces after attending a preview lunch at the gallery a day earlier. “I love the humor and the execution,” she said, “and the social message is very relevant.”

Zhu Scott, an adviser to the board of the Hong Kong International Literary Festival, bought “Dick,” showing beauty queen figurines lined up next to one of a man covered in dollar bills and “Get HIM to Forgive You,” where one lies in bed with alcohol and Valium. Scott plans to place the former in her office and the latter at home.

She said some friends in the creative and financial industries were also considering buying Hovnanian’s work.

Ingram said of the pieces: “I love her work. The question is, would people in China, who have never been to a prom or an American beauty pageant, understand it?” After pondering that awhile, he added: “Any way you look at it, the images are appealing.”