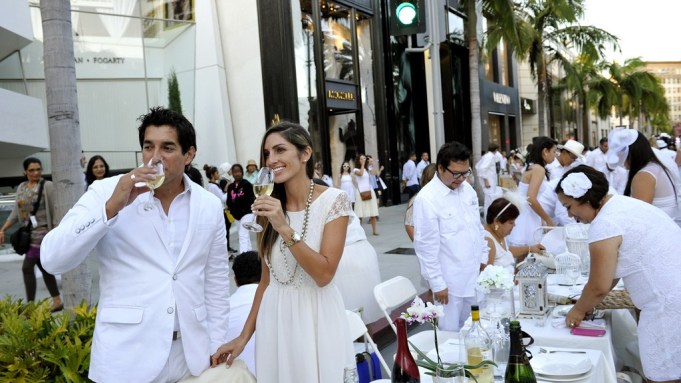 “I had to sign a confidentiality agreement,” insisted an event organizer at the first Beverly Hills-based Dîner en Blanc held Wednesday night, as photographers scrambled to find the event’s top secret location. All attendees — media included — weren’t informed of the très chic setting until 30 minutes before it kicked off. Meanwhile, confirmed guests were instructed to meet in prearranged locations where they were transported by bus for an evening billed as “flash mob dining.”

Upon arrival at their final destination on a cordoned-off portion of Rodeo Drive at Dayton Way, the group was greeted by a live jazz band that sang sultry cover songs like Édith Piaf’s “La Vie en rose” and the Eurythmics’ “Sweet Dreams.” They were also met by an onslaught of tourists who’d been window shopping and photo snapping at Miu Miu, Dior, Jimmy Choo and Valentino. Confusion was soon followed by curiosity as sightseers watched the invited guests trickle in.

The Dîner en Blanc tradition began in Paris 25 years ago when founder François Pasquier threw an intimate gathering for close friends. The guests were instructed to wear white to more easily spot one another. The event has since grown to include 40 cities around the world — including New York, where 3,000 guests gathered at Lincoln Center last year, and Montreal, where a group of 5,000 congregated at the city’s Olympic Park last week.

Wednesday night’s inaugural Beverly Hills outing proved a tougher logistical task, given Los Angeles’ reputation for snarling dinner-time traffic. Initially there were white balloons and little else…until bus by bus arrived with more than 1,300 people carrying their own tables, chairs, wine and food by hand. Suddenly, the impromptu picnic featured a sea of white — courtesy of the event’s all blanc dress and dine code.

“We didn’t expect the buses to be stuck in the traffic. Maybe we’ll have to make it a bit later to avoid the traffic next time,” said Aymeric Pasquier, son of François and a cofounder of Dîner en Blanc International. Still, he said Rodeo Drive was the perfect fit.

“The City of Beverly Hills came to see us and asked us to organize a Dîner en Blanc,” he said. “It was natural to have a Dîner en Blanc in such an elegant place.” He hopes to make Los Angeles an annual affair — though he said he and his cofounder Sandy Safi haven’t committed to Beverly Hills just yet as they hope to expand slowly.

“As [the concept] was a success in New York, we received requests from all over the world and in the States,” Pasquier explained. “We didn’t try to set up events in each city. Hosts from different regions of the world asked us to do the same. We don’t want it to get too big too quickly. We want to take time. We want to grow naturally, organically. We had like 4,000 people on the wait list for tonight.”

“I call tonight a random act of elegance,” Kalara said. “I’m wearing 50 shades of white tonight. White might not work for a barbecue, but here.…Dress as elegantly as you want. A spilled drink or stain is just a reminder of what an incredible time you had.”