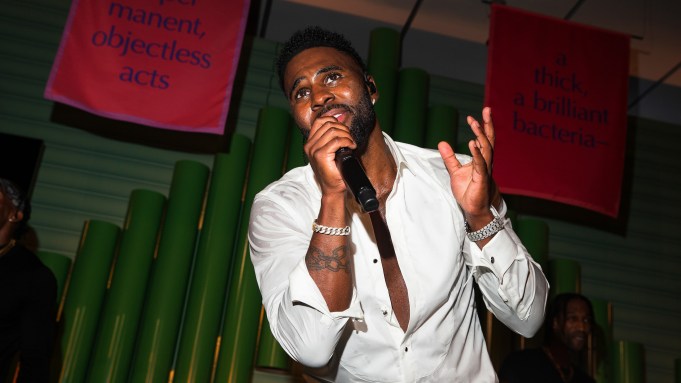 “I just wanted you to know that no evening at the Whitney would be complete without a demonstration,” said museum director Adam Weinberg, as the chants of union protesters seeped from the sidewalk into the museum’s glass-enclosed ground floor. “One of my trustees said to me during one of our more challenging moments, ‘Adam, you always say you want the Whitney Museum to be part of the conversation — that means that you don’t always get to choose the conversation.'”

Earlier Tuesday night, well-heeled supporters of the museum dressed in cocktail attire made their way past the picket line of protesters hoisting signs bearing messages including “Living Artists Living Wages” and “Whitney Workers Want Fair Wages.” Both groups know there’s no better time to raise awareness and monetary support than a gala — this year’s event raised more than $5 million for the museum.

The evening began with cocktails and appetizers on the third floor and guests were welcome to wander through the museum’s current Biennial exhibition “Quiet as It’s Kept” on the fifth floor. Everyone who opted to take the elevator over the stairs were greeted by shots of soju sake from an exclusive elevator bar.

“This evening is a homecoming; it feels very much like Glenn and my’s wedding,” quipped Golden, who became the Whitney’s first African American curator in the early ’90s and was an early champion of Ligon’s work. “Glenn and I have been on this journey for over 30 years; it started with art, and then it became life with art at the center.”

The museum exhibited a midcareer retrospective of Ligon’s work in 2011 and for many years one of his neon works hung in the Whitney lobby. Ligon, who recently visited the museum with his niece, highlighted the generosity of support staff. “I always say that it takes at least two hours to see anything at the Whitney: an hour to see the show and an hour to talk to all of the guards,” he said.

After dinner, Jason Derulo graced the stage with a lively performance of his top hits that had the entire room dancing. Afterward, the crowd walked a few blocks north to Genesis House — the car brand was the lead sponsor of this year’s gala — to keep the party going at the late-night and younger-leaning Studio Party.