Since every major figure in the art world is already in town for the Frieze Art Fair, it’s a convenient time to throw a party. 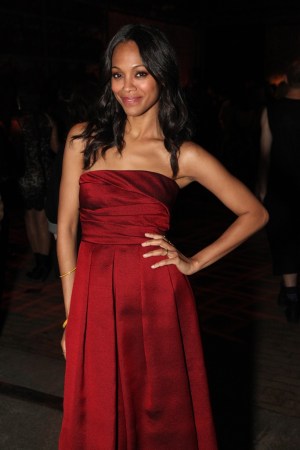 In the New York art world this week, there’s the Frieze Art Fair and then there’s everybody else. But since every major figure in the art world is already in town, it’s a convenient time to throw a party. So on Thursday night, the Whitney Museum threw its annual art party at Highline Stages in the Meatpacking District.

This party is hosted by the Whitney Contemporaries, the museum’s committee of young collectors, and they invited some of their peers with the promise of an (by most standards) affordable auction of up-and-coming artists, or at the very least, a cute crowd and an open bar — Emmy Rossum, Lola Schnabel, Zani Gugelmann, Nicky Hilton, Michael Avedon and Harley Viera-Newton were there, as well as the artists Dustin Yellin and Daniel Arsham, whose work was featured in the auction.

Zoe Saldana was one of the honorary cochairs along with Maria Giulia Maramotti, who had received an award from the museum the night before and whose family business Max Mara was also sponsoring the event. Saldana, who was in town for the Met ball and on a press tour for a new television miniseries, another take on “Rosemary’s Baby,” said she’s starting to become a young collector herself. How does she go about doing it?

“By following my heart and having one good agent that will guide us very well,” she said. “My husband is an artist. I get to have an inside perspective on the world of art, which I like.” So there you have it, young collectors, the key to collecting is to marry an artist and have a good agent. Saldana’s Frieze visit isn’t long — she was set to fly out of New York Friday and then to the Cannes Film Festival Sunday.