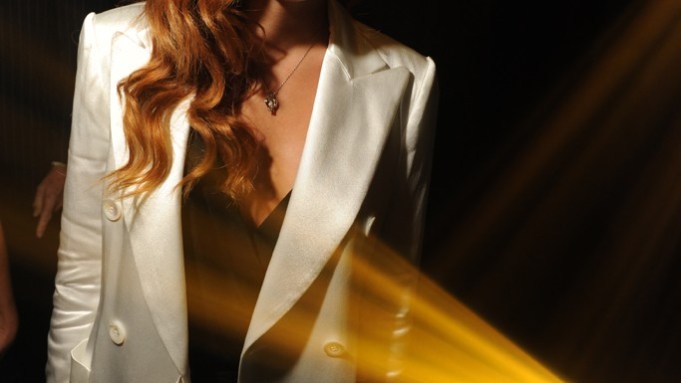 Art world luminaries gathered in Manhattan Wednesday night for the Whitney Museum’s annual gala and studio party, sponsored this year by Louis Vuitton, to toast Ed Ruscha on his more than 50-year oeuvre.

A quartet of handsome bellboys, à la Vuitton fall 2012, received guests at the entry of Skylight at Moynihan Station. Inside, purple streaks of crisscrossing strobe lights beamed. “There are shirtless men in there,” one guest gasped while winding down the long corridor into the semismoky space. Upon closer inspection, partygoers discovered a trio of fully nude models splayed across a pile of vintage Vuitton trunks and train cases at the center of the room. Artists’ stations — easels, paper and charcoal included — skirted the display, coaxing attendees to try their hand at figure drawing.

The room was teeming with art-party-types — Bob Colacello, Yvonne Force Villareal, Vito Schnabel, Salman Rushdie, Lisa Perry, Jeff and Justine Koons, Chuck Close and Dustin Yellin among them. “I’m so mesmerized. There’s so much sensory…” Lily Kwong said, fading off. “I walked in and I was like, ‘Oh, s–t! Naked people.’”

“I am so [pleased] about the new downtown space,” honorary chair Michelle Williams said, safely cloistered in the VIP area. Adam Weinberg later relayed happily that construction is on time and budget. The Renzo Piano-designed building is slated to open in spring 2015. “It won’t take me as long to get to from Brooklyn,” the actress smiled. Sofia Coppola soon swooped in to air-kiss Williams just as guests were being summoned to their dinner seats.

Revelers corralled into the dining room, painstakingly outfitted as to be on-theme — empty canvas frames floated overhead, menus were printed on sketchbooks with instructions “Eat Pray Draw,” and overflowing faux paint buckets served as table settings. “Bummer,” Jamie Johnson muttered after plucking a brush out of one, discovering no paint inside.

Ruscha ascended the dais to receive his award. “I’m commending the Whitney for its undying support for art of any kind — crazy art, not so crazy art, anxious art, art in free fall, emergency art, gay art, shoot-for-the-moon art, art that is not even trying to be art art and just plain old art.” Afterward, guests were treated to a performance from David Byrne. Tablemates Dianna Agron, Harvey Weinstein and Williams bobbed their heads along.

In the VIP area, Zoë Kravitz chatted with Riley Keough; the pair are costarring in next year’s “Mad Max: Fury Road.” “I don’t know how much I’m allowed to say,” Keough demurred when asked about her role. “Let me have one more glass of wine and I’ll tell you everything.”

Chelsea Leyland spent much of her evening with Hannah Bronfman who, ever the intrepid beauty expert, rocked a set of powder-blue eyebrows for the evening.

Harley Viera-Newton, plopped on a banquette, told friends how beau Ross One chose her Vuitton look for the evening while further back Sofia Sanchez Barrenechea was getting excited for her early morning plans. “I have a 9 a.m. dance class tomorrow,” she said. “I do it two or three times a week. It’s Latin dancing: cumbia, merengue, salsa. It’s like cha-cha-cha!”