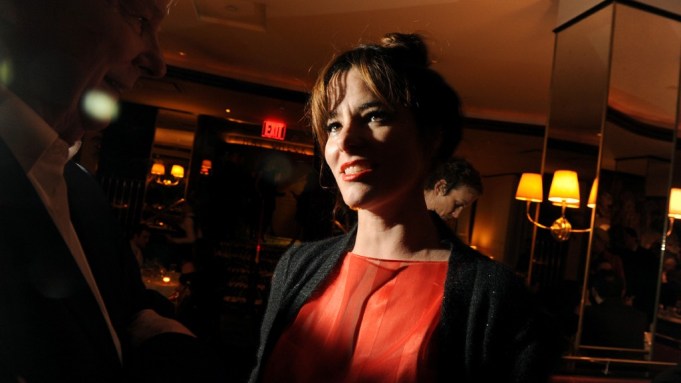 Manhattan’s art world heavy hitters flocked to Venus Over Manhattan Thursday night for the opening of “Gang Bust,” the BFBC-curated exhibition of paintings and sculpture from the late William Copley.

Collectors, gallerists and Copley aficionados floated through the space, studying the installation, which spans the breadth of the artist’s career from the late Fifties to the Eighties. Highlights include those paintings taken from the artist’s satirical, poppy “Nouns” series, wherein Copley (often referred to as “CPLY,” his working pseudonym) set everyday objects against striking, brashly patterned backgrounds. Other standouts come from Copley’s more salacious series, aptly named “X-Rated,” depicting erotic, if not outright sexually explicit, scenes. One painting, of the latter series, portraying a couple midtransgression caught Yigal Azrouël’s eye. “What’s going on over there?” Azrouël chuckled, surveying the acrylic-on-linen piece, titled “The Seven Year Itch.” The designer was visibly taken aback. “I don’t know what to say, to be honest with you. I didn’t expect that.”

Parker Posey had known what she was getting into. “I’m a big fan of Copley’s work,” she said, dressed in a crimson, floaty, semisheer shift, her hair knotted haphazardly on top of her head. The actress couldn’t elaborate. “I’m not good at talking about art just because I absorb it on a visceral level, not a cerebral,” she said. “I’m not made to talk about it.”

Midway through the meal, host Adam Lindemann made his opening remarks, disclosing the way in which he first learned of Copley’s work. “I received a catalogue in the mail,” he said. “It was called ‘X-Rated’ and I thought, X-Rated anything, I’m going to open it and take a look.”