He spilled the beans over dinner at Claridge's to guests including Sophie Ellis Bextor. 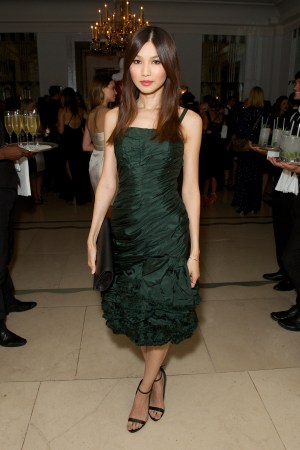 “I love this dress,” said actress Gemma Chan of the deep green ruched silk minidress she was sporting. “It’s pretty special. It was designed by Yves Saint Laurent for Dior in 1959.”

The actress, who has been recognized on the street far more frequently since her starring turn in the Channel 4 drama series “Humans,” is soon to appear in the action thriller “Stratton,” opposite Dominic Cooper. “It’s about a British Special Boat Service commando, who tracks down an international terrorist cell,” she said. “I am a little bit badass in this film and did quite a few of my own stunts, which was really fun.”

A heavily pregnant Sophie Ellis-Bextor said she was hoping for another boy. “I’m trying to breed a boy band,” she said. “I already have three boys and I want another one; I need a keyboard player. I’ve been told unofficially that it’s a girl, but I’m pretty sure I saw a willie on the scan.”

During the evening, Banks-Blaney unveiled his debut contemporary collection, a collaboration between William Vintage and Liberty, which will launch in November and be known as “William for Liberty.” The collection, made entirely in Great Britain, will include separates and outerwear for evening and day and rare Sixties prints from the Liberty archive selected by Banks-Blaney.

Other guests included Emilia Fox, Anna Friel, Dawn O’Porter and Chris O’Dowd, who were invited by Banks-Blaney after dinner to “enjoy a martini served by handsome waiters and get even drunker.”