The gala took place Thursday evening at The River Pavilion at The Jacob Javits Center.

By Kristen Tauer and David Moin on May 13, 2016
View Slideshow 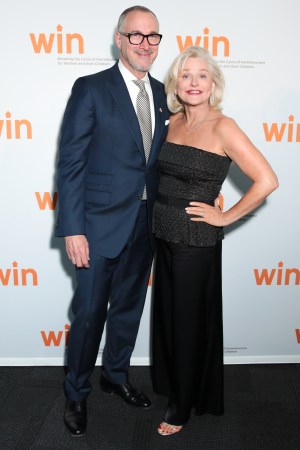 On Thursday night, a distinguished crowd from the retail, design and media industries gathered into the River Pavilion at the Jacob K. Javits Center for the 20th annual WIN (e.g., “Women in Need”) Way to Win spring gala dinner. WIN runs 11 shelters throughout New York, and takes a holistic approach to ending the cycle of homelessness for women and children by providing critical support programs and services. The dinner serves as a major fund-raiser for the organization.

“We house 10 percent of all the homeless families in New York City — we’re the largest provider of housing to homeless families in the city,” said Women in Need President and CEO and former speaker of the New York City Council, Christine Quinn. WIN is also working to redefine stereotypes around homelessness and raise the profile of the people affected. “Forty-six percent of our single mothers are working but ended up in shelter because they didn’t have enough money to pay their rent,” she remarked. “Twenty percent of people in shelters are five years of age or younger. They’re really what we are calling the ‘forgotten face of homelessness.'”

The soaring glass-box dinner space overlooking the Hudson River was filled with balloons, a physical symbol of support for WIN — attendees were each prompted to chip in and “purchase” one, with Airbnb purchasing the biggest (a $100,000 balloon) of the night. The organization has found particularly strong support from the retail and fashion industry, with table sponsors including Calvin Klein Inc., Coach, Inc., David Yurman, Donna Karan New York, L’Oréal Lux, Kering, Gucci, Bottega Veneta, Saint Laurent and Neiman Marcus Group. The event raised more than $2.5 million, with Gap Inc. and Haddad Apparel each donating $100,000 in clothes.

“When you see the determination and will these women have to want to get out of their situation, it just makes you go gosh, we can help them,” Turney remarked before dinner. “These are people who just fell on hard times.” The retail veteran originally became involved with the cause through her former post.

“What I love about WIN is that it acts as a north star for getting families back on the road to independence and self-reliance,” said Menicheschi. “Once they establish safety and security with housing, which is the most basic thing that any family needs, they track them toward a path to success,” he continued. “They run that thing like the tightest ship, and you see it from the moment you walk into one of the residences to the whole way through the process. They’re the A-game.”

The night was filled with moving anecdotes of WIN supporters visiting shelters, meeting residents and hearing their stories of struggle and survival, as well as a testimony from one adult WIN client, who said, “Everyone thinks I’m lazy, like the stereotype of a homeless person. It’s not that. It’s just that I had no one to turn to.” But she said WIN provided the stability she and her family needed. “When I leave the shelter, it will be for good.”

Kayce Freed Jennings, WIN board member and widow of journalist Peter Jennings, introduced three young WIN residents to the stage who are this year’s winners of The Peter Jennings Prize: A Child’s View, writing contest, including 10-year-old Marco, who read his “note to my older self,” reflecting on how one must never give up. “Surrender is not an option.”