The social set made its annual trip to the Bronx for the holiday ritual on Friday. 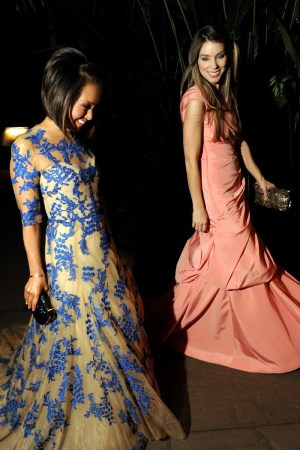 Manhattan’s society set ventured north on Friday night for its annual pilgrimage to the New York Botanical Gardens in the Bronx for the Winter Wonderland Ball.

Guests — including Byrdie Bell, Michelle Harper and Alexandra Lebenthal — filed into the space, a veritable labyrinth of greenery. “It’s like ‘Jumanji’ in here,” one befuddled guest said upon entering. A cavalcade of ground-skimming gowns ferried along, with guests taking in the surroundings: towering palm trees, overgrown vines and mini Douglas firs — all strung up with colored lights.

“Oh boy,” said one guest, dressed in the closing look from Oscar de la Renta’s fall 2012 collection, a powder-blue swirl of tulle, as she tried to gingerly maneuver by guests. Her train nearly got caught on a corner of Radio City Music Hall. “This is going to get tricky soon.”

Indeed, the dodging of trains became an issue as more guests turned up. Some gown-wearers held spare fabric in their hands to prevent from getting stomped on.

Guests sipped on holiday-themed aperitifs and traded upcoming holiday plans. Eddie Borgo is looking forward to seeing family in Napa and decompressing. “R&R is number one on my wish list,” the jeweler said.

Harper concurred: “Seeing my family, that’s at the top,” she said. “Being with them without the work and the hectic energy that New York has is definitely what I’m looking forward to.”

Guests made their way into the dining room, a monochromic space in floor-to-ceiling white outfitted with a crackling fireplace. Soon after partygoers plopped their minaudières into their seats, many took to the dance floor. The revelry got off almost without a hitch; one particularly spirited dancer accidently dropped her Champagne flute near Alina Cho. Cho graciously shimmied the shattered glass off her Monique Lhuillier gown and continued dancing. Genevieve Jones, also in Monique Lhuillier, tore up the dance floor with Andie Arthur. Bibhu Mohapatra was one of the first partygoers to duck out. “It’s that time,” the designer said.