VF Corp. ceo Eric Wiseman was the guest of honor at the annual fund-raiser Tuesday night at the Waldorf-Astoria. 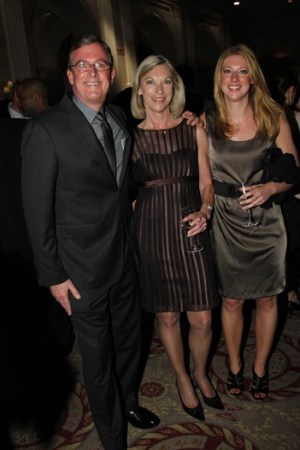 Eric Wiseman has gotten up close and personal with some cancer victims and their families and knows a lot about their battles against the disease. So when Ronald McDonald House asked him to be the guest of honor at its annual fund-raiser Tuesday night at the Waldorf-Astoria, he immediately agreed.

The chief executive officer of VF Corp. said he first became involved with Ronald McDonald House via VF’s participation in the Corporate Angel Network, which matches cancer patients traveling to hospitals with empty seats on corporate aircraft. “Dozens of times we’ve had sick kids on the plane. I always go back and speak to the families traveling with us, and I cannot tell you how many times the conversation involves Ronald McDonald House of New York,” said Wiseman. “Many times they say they don’t know what they would have done without Ronald McDonald House. So I knew something very special was going on at East 73rd Street.”

The event drew an overflow crowd to the hotel and raised $3.5 million, including $150,000 in pledges texted in during the dinner and displayed live on projection screens.

At one point in the evening the names of children who had lost their battles with cancer while staying at Ronald McDonald House New York were shown on screens to the audience. A visibly moved Barbara Walters made a special point to tell the other children in attendance, “It’s very scary when you see the names of the people who didn’t make it. But you all are going to make it, that’s why you’re here.”

Mackey McDonald, the former ceo of VF, introduced Wiseman by quipping that it was a little perturbing to think that his top lifetime accomplishment was replacing himself at the company.