By Erik Maza and David Lipke on December 18, 2013
View Slideshow 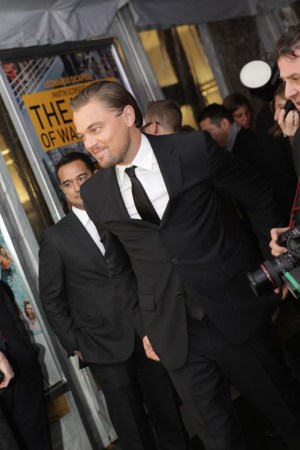 At the after party for the film “The Wolf of Wall Street” at Roseland Ballroom in Manhattan Tuesday night, Fran Lebowitz circled the booth where Leonardo DiCaprio held court, waiting to be waved in.

She was separated from the actor by several layers of people, from lowly Instagram-takers to the actor’s own inner circle, which was comprised of Martin Scorsese, Orlando Bloom, Jonah Hill, Joe Pesci, Kate Upton and Brad Grey, the chairman and chief executive officer of Paramount Pictures, which released the film.

This story first appeared in the December 19, 2013 issue of WWD. Subscribe Today.

Lebowitz was not among the groupies hoping for a selfie with DiCaprio.

She had been inside earlier, talking Scorsese’s ear off. But she stepped away and when she returned, she found her plush, courtside seat at the center of gravity of the big premiere suddenly impossible to reach. A bodyguard blocking the entrance only offered a conciliatory shrug that suggested he either didn’t recognize her or, perhaps more charitably, that there was no more room inside for a New York humorist.

Naturally, Lebowitz made a beeline for the door.

“It’s quite a hubbub back there,” she said.

“Wolf” follows the spectacular, hedonistic Nineties rise and fall of real-life stockbroker Jordan Belfort, played by DiCaprio, who founded the infamous brokerage firm Stratton Oakmont and was later indicted for securities fraud and money laundering. The after party was the culmination of an equally sprawling premiere, held earlier at the 2,000-seat Ziegfeld Theater, befitting of a production as lavish as this one, a big-budget, three-hour, star-studded epic that’s also Paramount Pictures’ main contender for awards this year. The cast features Matthew McConaughey and filmmakers Rob Reiner and Jon Favreau, all in attendance, in small but important roles. For a dash of extra star-wattage, Giorgio Armani, who collaborated on the film’s costume design, presented both the premiere in New York and in London, which took place last week.

The hype surrounding the film made the premiere a must-attend event during an otherwise low-key week, and it drew an unusually large number of captains of industry, including Mort Zuckerman, Robert Kraft, private equity magnate Ron Burkle and Ari Emanuel, fresh from engineering a takeover of IMG Worldwide by his talent agency William Morris Endeavor.

Lebowitz, who was the subject of a documentary by Scorsese, was invited by the filmmaker to have a cameo in the film as a judge, a role she’s naturally predisposed for.

“I can’t act. But I can play a judge because I’m very judgmental,” she said. She was asked if the film’s insights into the excesses of the world of finance are likely to resonate with moviegoers.

“I don’t have that much faith in the American public,” she said.

Margot Robbie, in her first meaty role in a major film playing DiCaprio’s love interest, was also overwhelmed by the spectacle of the premiere and had brought her mother for moral support.

“I really wanted her to be here for it,” the Australian actress said. “I called her two months ago and I was like, ‘Mum, you’re coming to the ‘Wolf’ premiere. I’m not doing my first big premiere without you.” Robbie credited Scorsese for a performance that is likely to draw comparisons to some of his previous leading ladies, like Lorraine Bracco in “Goodfellas” and Cathy Moriarty in “Raging Bull.”

“He’s not very overbearing as a director. He gives you the liberty to do what you think you should do with your character,” she said.

Because the film takes place in the Nineties, Scorsese and Academy Award-winning costume designer Sandy Powell sought out Armani, whose style is synonymous with the power dressing of the period, to collaborate on the costumes.

“I considered the idea that I could go back to the Nineties for a moment and review my look, which was so important for that decade, a wonderful opportunity for reflection,” the designer said. He and Powell worked to define the aesthetic of the DiCaprio’s wardrobe, whose input, Armani said, was “fundamental.”

“The Nineties look is all about the volumes, the large lapels and how they are positioned, the choice of the materials and color. I focused especially on the form of the shoulders, large but not excessively large, the necks, which are lower than today’s, and the trousers, which were particularly soft,” Armani said.

DiCaprio, who is coming off another period drama about a self-invented playboy, “The Great Gatsby,” has already earned a Golden Globe nomination for his part in “Wolf.” But he earned his biggest raves from some of the supporting players in the film, like Henry Zebrowski, who played one of Belfort’s earliest devoted brokers.

“We signed up for a cult, for the ‘Wolf’ cult,” he said. “[DiCaprio] could have been reading a laundry list and I would have been in awe. I’d follow him in anywhere now.”