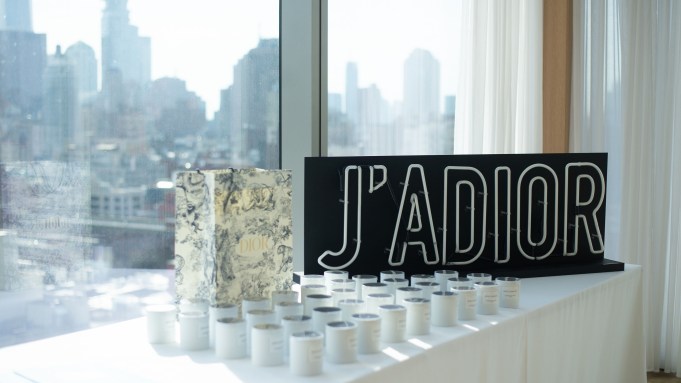 That includes the third installment of Women @ Dior, a mentorship program created by the fashion house, which made its debut in the U.S. this year.

Champagne, cookies and books on sisterhood were passed around merrily Thursday evening at the Public Hotel, overlooking Lower Manhattan’s skyline. More than 100 of Dior’s most fashionable, including mentors, mentees and other industry professionals, gathered to commemorate the event. The program included prepared remarks by Renaud de Lesquen, chief executive and president of Christian Dior Couture North America, Åsa Charlotte Regnér, deputy executive director of U.N. Women and France’s secretary of state for equality between men and women Marlène Schiappa.

The Women @ Dior initiative is part of the parent company LVMH Moët Hennessy Louis Vuitton’s push to promote gender equality and achieve a 50-50 ratio of men and women in management by 2020. Currently, 42 percent of women hold leadership positions at Dior.

“It’s a huge opportunity for reaching out and it’s allowed me to work with a group of young women to help them discover something that is new and generally inaccessible,” said Maria Grazia Chiuri, the first female artistic director for Dior, who has supported the program from its inception. “As a creative director and as a woman, I’m interested in opening the doors of our ateliers to show how sharing, growth and empowerment can take place through the creative process.”

The mentoring program, which pairs professionals in the fashion industry with young women in fashion design, business and engineering fields, started in Paris in 2017. The following year the program moved to other cities and included a launch party in Shanghai. Today, the global community of Women @ Dior mentors and mentees is around 300 people and growing.

This year, for the first time, the fashion house added men to its list of mentors.

Renaud de Lesquen said Dior’s decision to incorporate male mentors is part of the company’s mission to be more inclusive.

“We praise ourselves for being very exclusive, which I think is of course great,” de Lesquen said. “But we can be exclusive without excluding.”

He added that men are made more aware of the troubles women face each day when they work as mentors.

“All that stuff about men being perceived as more knowledgeable or more powerful when they walk into a room, I didn’t know that,” he said. “It took a woman to tell me.”

For the New York edition, 10 women and two men were asked to be mentors. One of them was David Mohammadi, a training manager for Christian Dior Couture.

“It’s an honor to be cheerleading behind these young girls,” Mohammadi told WWD.

Top students from Columbia, FIT and Parsons School of Design were selected as mentees. The female students are typically seniors in college or recent graduates. The mentorship officially lasts for one year. But many mentors and mentees say the relationships last much longer.

“My mentee is going to be in my life forever,” Christina Gouliamberis, h.r. manager at Dior, said at the after party. “My hope is just that the program lives on, forever.”

Schiappa said her interest in women’s issues was heightened after becoming a mother herself. She was still working in French politics and was asked “many, many times a day” who watched her two daughters when she travels.

“Nobody was asking the men, because everybody is thinking, his wife must be taking care of the children,” Schiappa said. “This is a double standard.”

She admitted that sisterhood, however, doesn’t always exist either — especially in politics.

“Now there is a small [amount of] sisterhood,” she told WWD, but she added, “I think sisterhood is a goal. I think we can try to achieve this. When you have mentoring you have sisterhood.”

And, she added that young women should not be ashamed of loving fashion.

After the formal presentation, guests were in good spirits as they headed up to the 18th floor of the hotel to mingle, watch the sunset and nibble on hors d’oeuvres, including de Lesquen.

“I’m very lucky,” the ceo said in support of women, “because I’ve always been surrounded by many women.”