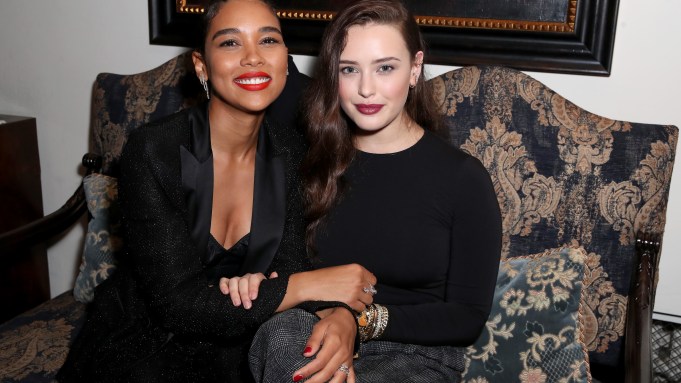 “I feel like the first thing that went through my mind was ‘Holy crap, did they choose the right girl?’ The next thing was, ‘Holy crap, people are paying attention to the things that I do,’ and that’s really humbling and amazing,” said Alexandra Shipp, Women and Film and Max Mara’s 2018 Face of the Future.

The annual party Tuesday night honoring the recipient of the award, which is given out as part of tonight’s Women in Film Crystal + Lucy Awards, drew a wide swath of female talent in Hollywood, including January Jones, Lucy Hale, Channing Dungey, Alfre Woodard, Abigail Spencer, Angela Sarafyan, Jaime King and more.

Shipp, 26, was 17 when she booked her first professional job on “Alvin and the Chipmunks: The Squeakquel” followed by television gigs on “Victorious,” “Awkward” and “Ray Donovan.” She also played Aaliyah on the small screen before landing in movies “Straight Outta Compton” and “X-Men: Apocalypse.”

Now, she has another “X-Men” film, “Dark Phoenix” and the “Shaft” spin-off film “Son of Shaft,” due next year. “They were editing that film while they were shooting, so I got a chance to see little bits here and there and I’m blown away by our director Tim Story. And Samuel L. Jackson? Come on, he’s the best. He’s a total legend,” she enthused.

Shipp plays his son’s best friend in the movie. “I’m not ‘the girlfriend,’ but I’m the almost love interest. I’m the girl he’s been pining after his entire life and I play a doctor, which is nice that I’m actually saving lives,” she said. “My character isn’t about what the men are doing, she’s about what she is doing, and I just love that.”

Shipp said that coming of age in “woke” Hollywood and the #MeToo movement has helped her assert herself. “When I choose a role, I make sure I know what we are actually trying to say with the project. It’s the first question I ask the director because if it’s something I don’t understand or I don’t agree with, it’s something I can’t act well and then go on a press tour and talk about it. And for me it’s all about having a higher vibrational viewpoint of what is right and what is wrong and making sure the projects I choose have better things to say.”

Case in point was this year’s “Love, Simon,” which told the story of a gay teen’s journey. “I’m able to change people’s minds maybe who are homophobic or don’t understand the gay community,” she said. “When it comes to love and life and happiness they get a chance to see that everyone deserves a great love story. It’s a great tagline in the movie, but it’s also a great reality.”

Shipp says she found her confidence “after about a thousand no’s. You’ve got to find a way to get comfortable and work around the rejection because it’s always a self-confidence thing. So for every hundred auditions, when you get one you like, it’s like, ‘This is who I am, and if someone else gets the job, well, they had a different artistic representation.’ It has nothing to do with you, it has to do with the aesthetic, the character. It just saves you a lot of heartache.”

Shipp believes that “if it’s not the right role, it usually takes itself out of the equation. If it’s meant to be, it will happen. There’s so many roles our there, no one deserves something over another person. It’s just about artistic representation and being true to yourself.”

Though she likes the chameleon-like nature of films, she said that a musical is definitely in her future. “I started singing before I started talking. My mom loves telling the story of me being a couple of months old and I’m just hitting Bjork notes in the grocery store,” she laughed.

She said that her clothes can help her alter her moods. “If I’m not feeling great, I’ll wear dark clothes or I’ll wear something bright to make myself feel better. Or if I’m feeling really great, I’m gonna be in plaid and polka dots and a rainbow flag headband.”

In her beaded black Max Mara suit, she said, “I wanna feel really strong and validated in my choices. At the same time I am super starstruck by 90 percent of these people, so I’m gonna be cool.”

Said Maria Giulia Maramotti, who is taking the reins from her aunt Nicola Maramotti in representing the Max Mara family in Hollywood, “Alexandra is really a force of nature. She deserves her success and I’m really glad she’s blossoming in this moment of her career and that we’re here to support her every step of the way.”

She added, “We dress real women and we love them all of them. That’s what my grandfather used to say, ‘A coat to every woman.’”