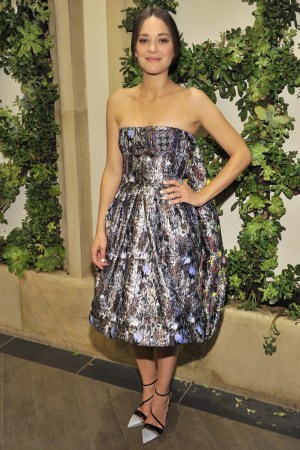 The 20th annual Women in Hollywood Celebration, hosted by Elle, is not a place to expect much in the way of red-carpet miscues, given its sponsors are a fashion glossy and Calvin Klein Collection. Instead, the event has come to be known for its heartfelt speeches and female empowerment vibe. And although the evening isn’t televised, producers do a bang-up job casting hosts. This year Andy Samberg took on the roomful of heavy hitters at the Four Seasons Beverly Hills, joking about everything from being cast as Christian Grey to the merits of “topknot-cat-eye-bold-lip vs. fishtail-braid-smoky-eye-nude-lip.”

This year’s honorees, Marion Cotillard, Nancy Meyers, Melissa McCarthy, Shailene Woodley, Naomie Harris, Reese Witherspoon and Eva Marie Saint, eloquently summed up their dreams and aspirations for women in Tinseltown. Meyers put it best early on in the evening when she said, “We have to take a seat at the table like the women senators who finally ended the government shutdown.”

“I love this event,” said Francisco Costa, who hosted Emilia Clarke, Joy Bryant, Jacqui Getty, Gia Coppola and Rachel Zoe at his table. “Obviously, or we wouldn’t be here spending money on it. But truly, it’s always honest and funny.”

Chelsea Handler took advantage of the mood to poke fun at Witherspoon’s “inebriated soccer mom” incident, telling people, “You should check it out on YouTube.” Said Witherspoon, “I’m not sure if I should thank Chelsea for that speech. Jeez!”

Kathy Bates said she had reservations about coming, fashion not being her bag. “A reporter pointed out that I was wearing the same Jimmy Choos I wore to an event two weeks ago, like he was smelling rotten meat. That made me a little nervous to be here,” she said. “The only reason I’m here is because of Melissa McCarthy. I feel like we’re sisters. Not in that Hollywood way, but in that Ancestry.com way.”

Bates may have had seniority over up-and-comers like 21-year-old Woodley (the Calvin Klein Collection Emerging Star Spotlight honoree), but the evening’s grande dame was the 89-year-old Saint, receiving the L’Oréal Legend award. She recalled working with Alfred Hitchcock, Cary Grant and Lillian Gish, and being married to the same man, director Jeffrey Hayden, for 62 years. “Now how many people can say that?”