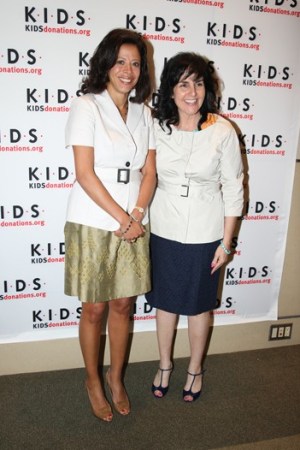 NEW YORK — Connie X. Rishwain, president of Ugg Australia and Simple, couldn’t help getting choked up after being lauded by two of her closest colleagues and honored for supporting children’s causes.

“It just changes your life forever when you see the faces on the kids when you give them products,” whether it’s shoes, clothes, books, bicycles or toys, said Rishwain, speaking Tuesday at the Women in Industry luncheon to benefit Kids in Distressed Situations at the Parker Meridian Hotel here.

Since its inception in 1985, KIDS has distributed more than $750 million in products to 65 million children who could be victims of poverty, abuse, homelessness or natural disasters and Ugg has helped in the mission. “I want to thank my mom and dad,” Rishwain said. “They gave me the culture to always give.”

For the 155 guests at the luncheon, which raised about $77,000, it was also a chance to meet New York state’s first lady, Michelle Paige Paterson. She was honored for her work battling childhood obesity.

“KIDS supports our fight against childhood obesity” through donations that can motivate children to exercise, Paterson said. “They’ll have a safer workout on the road to a healthier adult life.”

Also honored was Pilar Guzmán, editor in chief of Cookie magazine, who described KIDS as “a surrogate parent to millions of children.”

Fatima Goldman, executive director and chief executive officer of The Federation of Protestant Welfare Agencies, spoke about how her organization has received major support from KIDS, with donations to help furnish a shelter for pregnant women.

“The donation of a toy helps a child to know he is not forgotten,” she said.