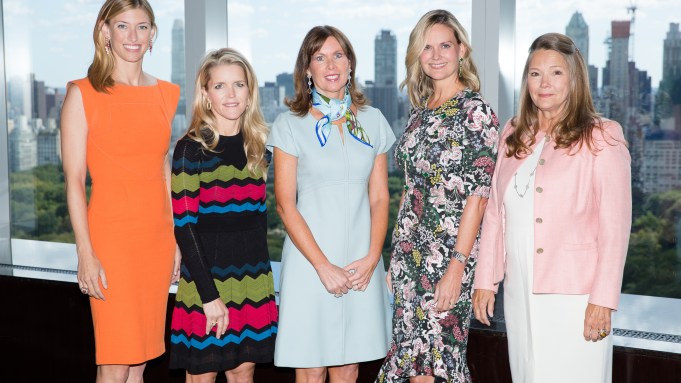 The Ladies Who Luncheon crowd — with a few men thrown in for good measure — descended upon the Mandarin Oriental on Monday morning, Birkin bags hanging from their wrists, for the Women’s Committee annual fall luncheon. Clusters of festively festooned women were cheers-ing just shy of the lunch’s noon start, and pondering sartorial questions born of the unseasonably warm weather. “Can I still pull off the white jeans since it’s 90 degrees?” one attendee asked a friend while filing into the window-lined ballroom on the 36th floor.

The Women’s Committee is celebrating its 35th year, and with 551 members, it’s not a feeble effort. The organization has raised over $150 million to support the Central Park Conservatory since its founding and contributes over 20 percent of the park’s annual budget; this year they raised a record-breaking $250,000.

To commemorate the anniversary, the organization is offering a scarf featuring artist Alexis Rockman’s “Meadow” watercolor. “We’re bringing back the scarf this year,” said committee president and longtime member Suzie Aijala, who was wearing a preview of the design tied around her neck. “I have Hermès to thank for that,” she added, responding to praise of her skillful bow. “They gave me a little booklet years ago.”

“I look at the park as a work of art,” remarked Central Park Conservancy president Douglas Blonsky, who was mum on his favorite part of the park but admitted that he enjoys the change of the seasons. “Actually, winter is a really great time, when there are no leaves and you can see from one end to the other,” he added. “You kind of feel like you own [the park] at that point.”

A private dinner to be hosted by Van Cleef & Arpels was given away to one lucky attendee — and the winning number pulled just so happened to belong to a covering member of the press. After lunch, Thomas P. Campbell joined ABC News Correspondent Deborah Roberts onstage in conversation to discuss one of the park’s most notable neighbors: The Metropolitan Museum of Art, where Campbell serves as president and chief executive officer. A park-facing entrance is being developed, and the museum has worked to promote accessibility; initiatives include numbering the galleries to make them less daunting for reluctant visitors.