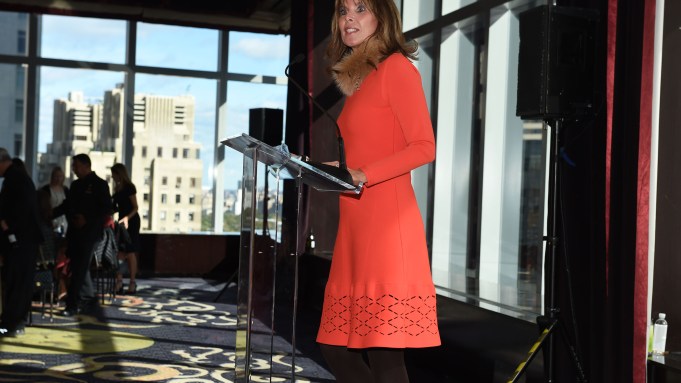 “If this isn’t a perfect fall day, I don’t know what is,” remarked Suzie Aijala, staring out at the impressive view of Central Park from the 53rd floor of the Mandarin Oriental Hotel.

The sun had broken through the clouds post-storm just in time for the Women’s Committee of the Central Park Conservancy annual fall luncheon. Committee president Aijala kicked off festivities, announcing that this year’s luncheon raised more than $226,000; last year, the Women’s Committee raised over $10 million for the maintenance and enhancement of the public park.

After lunch of miso glazed salmon, the society crowd tuned into an onstage conversation between artistic director of the Public Theater Oskar Eustis and founder of Public Works Lear deBessonet. The pair discussed the history and future for the free summer theater series Shakespeare in the Park.

“Culture belongs to everybody. The theater should belong to everybody. We’re a better city if we have access to the best things that the culture provides,” said Eustis of the public programming, which takes place at the open-air Delacorte Theater. “It’s not just free theater: it’s the best for free. It’s Shakespeare for free, it’s Meryl Streep for free, it’s Al Pacino for free.”

Sure, but why Shakespeare?

And that — societal consensus — is priceless.

More Coverage From WWD.com:
Looking Back on 25 Years of the Hamptons International Film Festival
A Look Into the Life of Dries Van Noten