On Tuesday night, the director screened “Midnight in Paris” in New York. 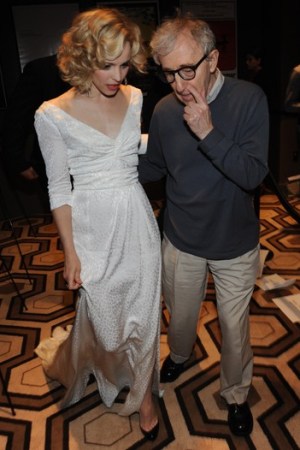 Woody Allen’s “Midnight in Paris” has been described as a love letter to its titular city, but in New York on Tuesday night the director explained it was born out of a marriage of convenience.

“They finance me,” Allen said of his recent string of European films when asked if he has any plans to shoot in New York again. The Europeans’ willingness of late to underwrite Allen’s productions hasn’t been a secret, but that really couldn’t be the only reason, could it?

“I enjoy it, but it is really primarily because they finance me,” Allen said, while on the carpet at a Cinema Society- and Thierry Mugler-hosted screening of the film the at Tribeca Grand Hotel. “If I had the money and I could work in New York, I certainly would…I’m going to Rome this summer because Rome said if you come here, we’ll finance your picture.”

With that Allen, dressed in his uniform of khakis, a button-down and gray sweater, was enveloped by a pack of photographers eager for a photo op of him with his star, Rachel McAdams, looking a touch more glam in a white Louis Vuitton dress.

In the film, Allen’s protagonist, played by Owen Wilson, is magically transported to Paris in the Twenties where he mixes it up with the era’s luminaries. (Kathy Bates as Gertrude Stein, Adrien Brody as Salvador Dali, Allison Pill as Zelda Fitzgerald, Corey Stoll as Ernest Hemingway, etc.) Following its Cannes debut last week, “Midnight in Paris” has earned fairly high marks, and the screening attracted its own sort of salon, including Mary Kate and Ashley Olsen, Elettra Wiedemann and Valentino and Giancarlo Giammetti, among others. Leaving the theater, Julian Schnabel could be overheard rendering his verdict (“Cute.”) to a crowd that included Lou Reed and Rula Jebreal.

Following the screening, some of the cast, including Bates, Stoll, McAdams and Michael Sheen trekked a few blocks to the SoHo Grand Hotel for an after party, where Allen himself made a very brief appearance. Standing at the bar, Lorenzo Martone offered a glowing review, but also wondered who a time traveler from 80 years in the future might bump into today.

“The Kardashians or the Real Housewives?” he said with a laugh. “Oh my God, what a disaster.” Kaley Cuoco in town for the CBS upfront explained that she had missed the Allen screening to see her “Big Bang Theory” co-star Jim Parsons on Broadway in “The Normal Heart.”