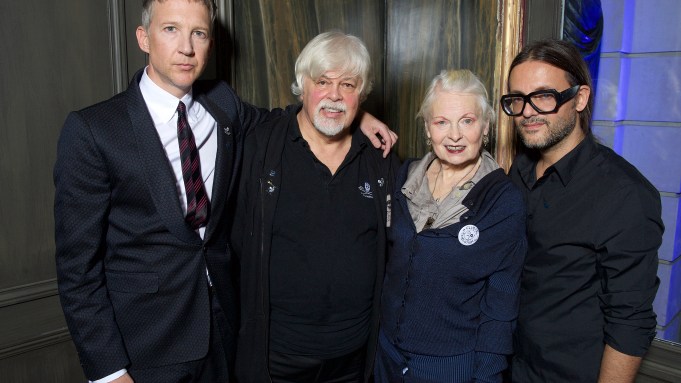 PARIS — Asked on Tuesday night what fashion can do to help save the oceans, Vivienne Westwood was not fascinated by the question, quickly offering, “Choose well and make it last.”

The British fashion maverick and activist was among key speakers at an event at Les Bains in Paris for Parley, an organization dedicated to raising awareness about the fragility of oceans and forging conservation and protection projects.

Westwood conducted a brief Q+A with Paul Watson, founder of Sea Shepherd Conservation Society, who spoke about diminishing amounts of phytoplankton, which provides half of the earth’s oxygen and is being depleted due to the massive slaughter of whales, which provide its nutrients. “To be blunt, the planet can be saved with whale s–t,” he said.

Earlier, Westwood was coaxed by a reporter to talk about her fashion business and she said she would open boutiques in New York and Paris, the latter on Rue Saint-Honoré, in the next six months. She characterized the expansion effort as bringing greater efficiency to her operations.

A series of speakers exalted the beauty of the ocean, and stressed the urgent need to rehabilitate it.

“We thought the ocean was too big to fail,” said pioneering deep-sea researcher Sylvia Earle. “Dive. If you haven’t done it, put it on your bucket list.”

Hosted by Parley founder Cyrill Gutsch and Jefferson Hack, cofounder of Dazed Media, the evening spanned a vegan dinner of artichoke soup and cauliflower “steak” — and a live video transmission from environmentalist David Mayer de Rothschild, who was in Rome as an estimated 100,000 people gathered to watch images of meerkats and crumbling icebergs projected onto the Vatican in an effort to draw attention to climate change.

“The destruction of the oceans is everyone’s problem,” Mayer de Rothschild said.

Bianca Jagger, Alexandre Mattiussi, Betony Vernon and Aymeline Valade were among fashion types whom Gutsch, who had worked with companies including Levi’s and Adidas before founding Parley, knew.

“When I met Paul Watson, I realized I couldn’t keep designing products and ignoring that the oceans are sick,” he said. “If we don’t act, the oceans will be dead by 2048 and I can’t live with that, and I hope you can’t either.”

Actor Benn Northover noted he has another conservation ambition: To raise $6 million for the Anthology Film Archives in New York, which shelters a treasure trove of independent cinema. He noted he’s also writing a film script with his brother Jack, a musician, about life in their hometown of Suffolk, England.

Actress and singer Joana Preiss is in post-production on what she called an “art documentary” about bullfighting that she filmed herself with a Super 8 camera, describing the sport as “ecological.”