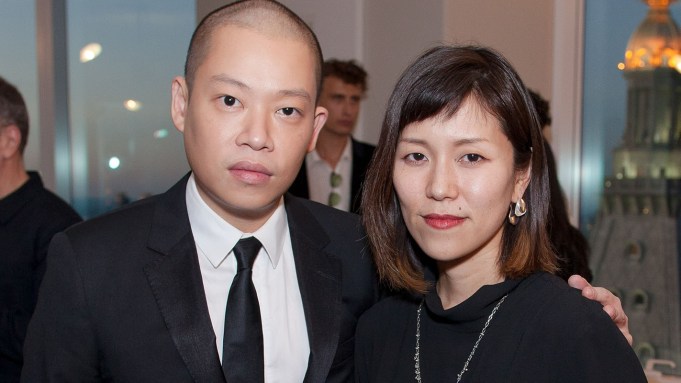 NEW YORK — With the only constant in the industry being change, it’s no secret the fashion, beauty and retail worlds must constantly evolve. On Tuesday evening, WWD brought together a group of designers and executives for its “40 Under 40” event to recognize those visionaries who are steering the industry into the future. Faced with frequent changes within the marketplace, these key players gathered over cocktails high atop the Madison Square Park Tower to discuss how they are all embracing — and often leading — the industry’s disruption.

“My mantra is to learn something new every day,” explained Matteo Del Vecchio, chief executive officer of Brooks Brothers’ new brand venture Deconic. “The advantage and disadvantage of being under 40 is we maybe have less experience than some of our peers, but we have an attitude of being more willing to learn. I try to take that advantage in what I do.”

The Italian-born Del Vecchio, whose father Claudio Del Vecchio purchased Brooks Brothers in 2001, sees progress as exciting. “Sure, change makes everybody nervous, but change is a big opportunity to do things better and to engage with the customer in a new way.”

Twin brothers Adam and Ryan Goldston, who founded luxury athletic brand Athletic Propulsion Labs in 2009 at age 23, have a similarly enthusiastic approach to changes in the marketplace.

“Everyone is talking about how the retail industry is struggling, but I think it’s an incredible time because brands who are doing something different and innovative are setting themselves up for the future,” explained Adam Goldston. “Millennials are driving a lot of consumers in how they’re spending their money and time and energy. Since we fall within that [age] category, it’s been amazing for us”

Across the room, another set of twins — brothers Alex and Mike Faherty — reflect the laid-back coastal aesthetic of their namesake apparel brand in their casual dress. With six retail locations, the Faherty brothers maintain a bricks-and-mortar presence by “catering to the local clientele” in places like New York City; Boston, and Newport Beach, Calif.

“Every area we have a presence in has tourists, but we try to cater to the people who actually live there,” says Alex Faherty, who acts as the brand’s director of marketing. “As a family brand we tailor it to what we want. For me, I want to walk into a store that’s both comfortable and accessible.”

A black-tie clad Jason Wu, who briefly stopped for a cocktail en route to the Résonances de Cartier Launch Gala on Governor’s Island later in the evening, was also among the honorees in attendance, as were Uri Minkoff and John Ballay, co-founder and chief executive officer of The Knot Standard with president Matthew Mueller.

Kith Founder Ronnie Fieg, who on October 7 opened a Manhattan flagship, admitted a passion for his company has contributed to his success.

“I live and breathe the brand,” said the New York native, who attended Tuesday’s party with his wife, Shira Yaakov. “It’s passion that helps get anybody to a certain point and it’s what’s propelled me.”

Fieg, who began his career at age 13 as a stock boy and salesman for footwear chain David Z, explained he still considers himself a student. “I think staying true to [my] beliefs, hard work and passion have gotten me to where [Kith] is today.”

Wearing an absinthe-colored jumpsuit from her debut ready-to-wear collection, designer Rebecca de Ravenel — like many of her peers in the room — approaches her business with a refreshing degree of optimism.

“Nowadays when life is not so happy with everything going on in the world, I think people come to me for a little bit of whimsy and color and fun,” she said of her line of statement earrings.

Alexandra Sickles, de Ravenel’s chief communications officer, cited the “big revival of costume jewelry in the past two years” as part of the brand’s success. “Our retailers [tell us] it’s the first time they’ve seen women buying a $10,000 gown and wearing a $300 statement earring.”

A Look Into the Life of Dries Van Noten