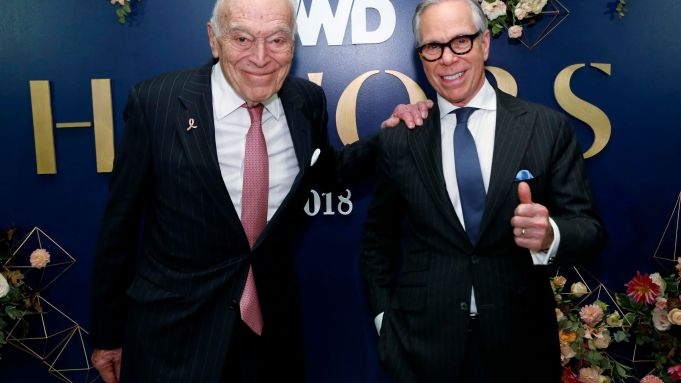 On Tuesday evening, the fashion and retail industry toasted the newest class of WWD Honors recipients at the WWD Retail & Apparel CEO Summit in downtown Manhattan.

Among those being honored were Leonard Lauder, who received the John B. Fairchild award, Emanuel Chirico, Canada Goose, Markwins and Kering. Donna Karan, Tory Burch, Tommy Hilfiger, Olivier Rousteing and Spencer Fung were among those celebrating their peers and longtime friends at the Wagner Hotel.

Lauder was his typical charming self during a conversation on stage later in the evening, including a classic note from his mother Estée: “When sex goes out of business, so are we.” He also touched on WWD as the original influencer, crediting Fairchild with laying the groundwork for the beauty and fashion businesses to thrive by creating the scene “name by name, brand by brand” and “creating gossip.”

“The ‘historics’ of that era started the concept of influencers. When we launched Clinique in 1968, do you know the medium I used? Women’s Wear Daily because they were the most influential press there was.”

“I worked at Esteé Lauder companies for 10 years. I am in love with Leonard Lauder, as many people are tonight,” said Linda G. Levy, president of the Fragrance Foundation, during the evening’s cocktail hour. “We admire his wisdom, his kindness, and he really is a man who sees the future.”

“Leonard Lauder has been so important in my life, because we share so much,” Karan said. “He cares about people, he cares about health care, which is really important to me,” she added. “We’ve gone through so many journeys together on every level. When I heard he was being honored, it was important that I be here [because of] how much I love the family and him and everything he stands for.”

Karan also touched upon her journey with Fairchild and WWD.

“I remember when I went for my first job, when I was 18 years old, to Women’s Wear. I went to John — I was in school at Parsons — and I said, ‘Can I have a job? I want to be an illustrator.’ He said, ‘I think you should be in design.’ It was one of those things.”

Hilfiger described Lauder as a “trailblazer” and “the ultimate gentleman.” “I’ve never seen a person with such passion for the business and such a knowledge for what happens on the selling floor and what happens in the boardroom. He’s one of a kind,” he said.

Hilfiger also praised Chirico, who was receiving the Edward Nardoza Honor for CEO/Creative Leadership. “Manny Chirico is the leader of one of the most powerful fashion conglomerates in the world. And the way he operates is really empowering his incredible teams, and I’m happy to be a part of PVH,” the designer said.

François-Henri Pinault arrived with wife Salma Hayek. “I’m intimidated,” said Pinault, reflecting on what it meant to accept Kering’s Corporate Citizenship honor in a room of his peers. “It’s not just for me, because I work with a lot of people who are really proud of [the honor]. When we announced it to them, they were really proud. It’s important for the teams, truly for the teams also — not just for me.”

As for Kering’s commitment to sustainability and corporate responsibility, Pinault said, “It’s very much into our blood. I don’t even have to push anymore, all the brands are taking the initiative themselves now. It’s very much a collective effort, which is very rewarding.”

In accepting his company’s award for Corporate Citizenship, Pinault spoke about its commitment to the environment and gender parity. “My first thoughts tonight are for my teams. They did incredible work to deserve this award. I’m talking about my corporate teams in charge of sustainability, led by a brilliant woman, Marie-Claire Daveu, but also the teams in charge of sustainability in each of our brands. Of course, it’s a collective effort, and tonight I’m receiving this award with gratitude as a collective recognition.

“Ten years ago, when we embraced social responsibility, it was a little bit overlooked. Thankfully, it became much more prominent nowadays. Back then, my goal was to make Kering one of the most influential luxury groups in the field of sustainability. I’m really convinced that this is one of two fundamental missions of a modern luxury group. We have to set high standards and find solutions for the entire textile industry. This is not a field of competition or corporate individualism. It’s a feel for community, it’s about sharing and it’s about corporate generosity. All the initiatives we took over the last 10 years, I hope we created a momentum that will influence many other corporations to join the ride,” Pinault said.

“In addition to our commitment toward the environment, is our commitment to the cause of women,” Pinault said. He said 10 years ago they created the Kering Foundation and they’ve been fighting against violence against women. Five years ago when they started their partnership with Cannes Film Festival, they advocated for better representation of women in the film industry. “Even within our group, we are putting all our efforts on gender diversity, gender parity and our goal is to make Kering one of the best places to work for women,” he said.

“I think the luxury industry must stand for something very meaningful. I think that private corporations should be part of the solution if they want to stay relevant for future generations. Receiving this award tonight is an invitation for all of us to keeping up our efforts,” Pinault said.

In accepting the Edward Nardoza Honor for CEO/Creative Leadership, Chirico, chairman and chief executive officer of PVH Corp., spoke about business leaders’ responsibility to engage in the most significant issues of the day.

“Our industry is facing many issues today, and as business leaders, we are being forced to deal with rapid change and unprecedented challenges. At the same time, we have seen many governments around the world, including our own, abdicate their responsibilities and not prepare for the future, whether its issues ranging from retirement and infrastructure to automation, immigration and worker retraining. As a result, society is demanding more from the private sector and its business leaders,” Chirico said.

“Whether it’s tax reform, taxes, immigration or just the general role of being a good corporate citizen, as business leaders we have the responsibility to engage in the important issues of the day. To prosper over time, every company must not only deliver financial performance but also show how it makes a positive contribution to society. As business leaders, I challenge all of us to work to benefit all of our stakeholders, not just our shareholders. We also have the responsibility to consider the needs of our employees, our customers and communities where we operate. There is a leadership void today around the world and especially in the U.S. There are traditional institutions that our political leaders are not addressing. As business leaders we have a major role to play in filling this vacuum. I challenge all of us to engage on important issues that we all face, and collectively as an industry to make sure our voices our heard,” he continued.

“We’re really proud to be a global brand from Canada,” said Dani Reiss, president and ceo of Canada Goose Holdings, as he accepted the honor for best-performing company in the large-cap category on behalf of the firm’s more than 3,000 employees around the world.

“We have very much followed our own playbook to get to where we are today,” Reiss said. “It hasn’t always been an easy path, but it has certainly been very rewarding along the way. This reward recognizes financial performance and that was only possible because of the performance of the very talented and dedicated team that I get to work with every day.”

The firm was founded more than 60 years ago and went public last year, but Reiss said, “I still think we’re just getting started.”

Kudos were offered by Stefano Curti, global president of Markwins, as well as he accepted the honor for best-performing company in the small-cap category with “a million thanks.”

“Markwins has now become the largest independent company in beauty,” Curti said. “In spite of this growth, Markwins has kept the unique spirit of being an indie company.”

He pointed to the company’s nimbleness, humility, speed and innovative approach as well as its diverse workforce.