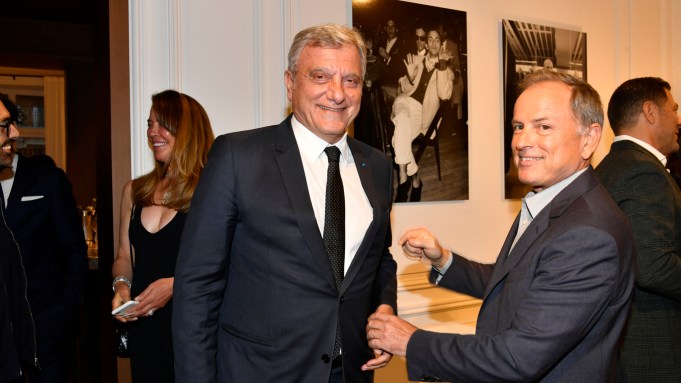 HIGH TIME: Thousands of photos — perhaps millions — will be taken during Paris Fashion Week’s nine-day run, but on Monday, a crowd gathered at the Liaigre flagship to sip Champagne and view designer portraits of yore, mostly black-and-white, from the WWD archives.

The event to kick off the week was sponsored by The Palmeraie luxury complex in Scottsdale, Ariz.

Luxury was on people’s minds — how could it not be, surrounded by blown-up photos of fashion greats? — as they gazed at a young Karl Lagerfeld pumping iron, and Diane Von Furstenberg primping herself in her rose-papered bathroom in the late Seventies.

That was luxury then, but what is luxury today?

“Privacy. I think it’s the ultimate luxury, to be private,” said Giambattista Valli, wearing sunglasses after a long day of fittings.

Executives from rival luxury houses politely exchanged greetings — “Bonjour, monsieur” — while fashion designers sidled in to catch up with editors.

A photo of Yves Saint Laurent and Bianca Jagger at the wedding reception of Loulou de la Falaise and Thadée Klossowski de Rola caught the eye of a human resources executive. “He was one of the very greats — he and Christian Dior,” she gushed. “I want that picture for my office.”

After last year’s renovations, the Liaigre interior design house with its plant-lined terrace had some people wishing they could move in. The showroom took over the four-level space from Steinitz, swapping the famed antiques dealer’s 18th-century furnishings for minimalist sofas and furniture.

“Luxury is about refinement, about sophistication, about being great and not too much,” said Ingie Chalhoub.

“I would say today there is a need to go a bit further and luxury is about sustainability,” she continued, glancing around at the plant-lined walls.

“For me, luxury is the pure meaning of emotions — so something that goes beyond here,” Dior ceo Pietro Beccari said, tapping his forehead. “It’s just here,” he said pointing to chest. “So if I have to summarize, luxury is emotion.”

“To me…luxury means being gracious to other people and I feel that if you can afford to be gracious to people, that, to me is true luxury,” said Daniel Roseberry of Schiaparelli.

“Today, luxury is all about something that is really personal, about love, about patience and something quite really emotional, that comes from your heart, and everything you do and the best you give…it’s the way you do and the time you give,” mused Johnny Coca, Mulberry’s designer.