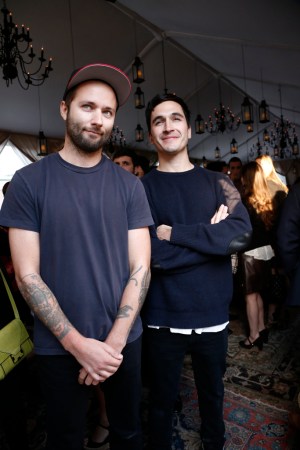 On Tuesday night, most of the designers, retailers and personalities who make up New York’s fashion establishment could be found at the rooftop penthouse of the NoMad Hotel.

Ralph Lauren, Calvin Klein, Donna Karan, Carolina Herrera, Tommy Hilfiger, Diane von Furstenberg, Lazaro Hernandez and Jack McCollough of Proenza Schouler, Prabal Gurung, Joseph Altuzarra, William Lauder and others all convened for the launch of WWD’s new weekly. Around the room, and at the step and repeat, they all gamely posed with the heavy, boxed first editions of the glossy.

“I can’t believe this is happening,” said McCollough, who, along with Hernandez, is a member of “The WWD Six,” the subjects of the issue’s six covers. (Alexander Wang, The Row’s Mary-Kate Olsen and Ashley Olsen, Jonathan Anderson, Chitose Abe of Sacai and Christopher Kane are the others.) “We just saw it now,” McCollough continued. “We shot it like three days ago.” (The covers were rolled out in Instagram earlier that day — in case you needed further proof that times are changing.)

In the hotel’s so-called cathedral, a viewing room was set up with copies of the issue displayed like Gutenberg Bibles, so guests could peruse at their leisure.

“It looks beautiful, like a collectible,” said Thakoon Panichgul. “[WWD] is multichannel now, it’s not just a paper. I think that in order to grow, you kind of have to close one door and open another.”

Reflecting on the momentous change was the theme of the night. “Change is good and it’s reflective of what’s happening in the larger scheme of things and how people communicate. It makes a lot of sense,” Creatures of the Wind’s Christopher Peters said.

The party was a reflection of New York’s fashion industry as it stands now — from the new guard (Hernandez and McCollough, Gurung, Baja East’s Scott Studenberg and John Targon) to the design greats recognized by their first name (Donna, Calvin, Ralph, Carolina). Both groups snacked on canapés served off enamel trays featuring the covers. “I’ve never seen food served on my photographs before,” said Nigel Parry, who shot the designers over six days on three continents.

On their way out, everyone picked up a boxed copy to take home. “At first I was scared because you know, big change,” said Cynthia Rowley. “But now, I’m so excited. It looks so beautiful, and it’s just more Women’s Wear to love.”

Von Furstenberg hadn’t yet flipped through the issue as she dashed out the elevator.