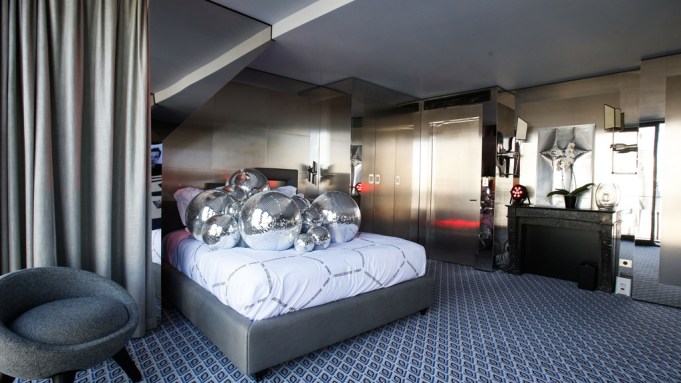 GOOD SPORTS: Yoox took over Le Montana hotel in Paris on Saturday night. Thierry Lasry, Maxime Simoëns and Lutz Huelle were among  guests at the party hosted by the e-tailer and the sporty fashion magazine Sepp to celebrate the ongoing European soccer championship.

In the hotel’s restaurant La Gauche Caviar were displayed the 10 sweatshirts in the capsule collection called “#Yooxsoccercouture.” They were realized by an equal number of fashion labels, including Peter Pilotto, Dries van Noten, Nina Ricci, Damir Doma, Paul Smith, Simone Rocha, J.W. Anderson, Marni, Vika Gazinskaya and Umit Benan. Each conceived a sweatshirt and a T-shirt devoted to the brand’s home country. J.W. Anderson, for instance, played on Northern Ireland’s iconic clover, while Pilotto created an abstract map of the Austrian slopes.

“The idea was to to celebrate football and fashion,” said Yoox president Luca Martines.

“I like the Dries van Noten sweatshirt — very Belgian,” said Simoëns, who had just showed his first men’s collection in Paris. “We’ll have a freestanding store dedicated to men’s clothes in the Marais in January.”

Meanwhile, Markus Ebner and Godfrey Deeny, Sepp’s founder and editor in chief, respectively, were among the soccer aficionados watching the Portugal-Croatia game in a suite.

“I am a big soccer fan,” said Lasry. The eyewear designer, whose celebrity following includes Gigi Hadid, Rihanna and Jennifer Lawrence, just opened his first store, which will be feted during Paris couture season. It was designed by Vincent Darré, who also designed Le Montana that’s a stone’s throw away.

In another hotel suite, DJ Clara 3000 was mixing tunes.

Huelle, whose next women’s collection will be shown in Paris in October, joked about being on the party circuit during Men’s Fashion Week.

Could Lutz Huelle have men’s wear some day? “Oh yes,” the designer answered, adding he likes soccer, but not in an overwrought way. “I am a fan of people going out together, having a good time.”