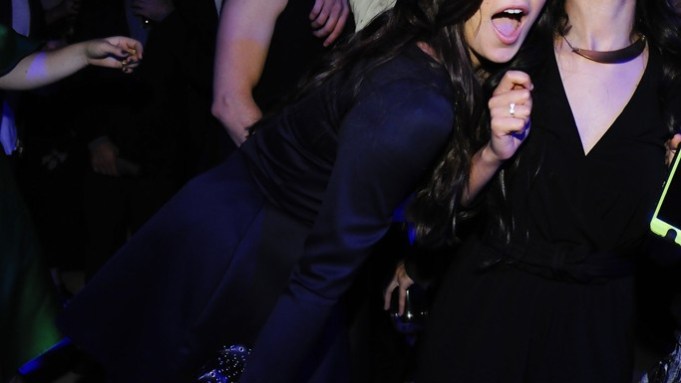 Although the soiree had a no-parent feel to it, the under-21 crowd stayed on its best behavior (with the occasional dance outbreak). While most attendees were technically teenagers, one guest who made it into the October issue was younger than the party itself. When the 11-year-old actress (an Oscar nominee) Quvenzhané Wallis heard “Fancy” play, she screamed, “Oh my god!” while making her way to dance with Ed Oxenbould.

Even though the dance floor overlooked a neon-lit pool and a glittering view of the city, it didn’t hold guests’ attention for too long once an energetic 30-minute performance from Australian band The Preatures started. “They always do something new and different and it’s always just fun and fresh,” said Sarah Hyland. As lead singer Isabella Manfredi serenaded her audience, Hailee Steinfeld and the members of Fifth Harmony found themselves dancing front and center while a camera drone recorded the scene.

Although the M.O. was simply to have fun, guests also wanted to network/bond with their peers. “The young ones are always my favorites,” said Zendaya, who is not too much older herself. “I always like to motivate them and let them know that they’re killing it and I see them.” Debby Ryan followed, saying, “I think more than anything I want to see the newcomers; along with some of the editors who have taken a chance on me when other people haven’t.”

Daughters of actors like Maude Apatow and Greer Grammer were also present. Grammer came with sage advice from her father Kelsey saying, “He’s always taught me to make sure I love acting for acting and not the fame, but to make sure I love the craft. He’s always sure of letting me know that Hollywood’s a lot harder on women than it is on men.”