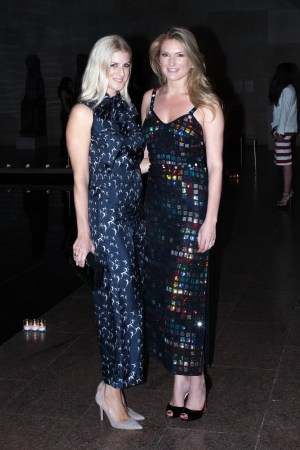 “I think that’s the first time somebody has tap-danced in the Temple of Dendur,” Zuzanna Szadkowski said onstage Wednesday evening in the Metropolitan Museum’s famed hall. It was a night of many firsts, as YoungArts celebrated its 35th anniversary with the inaugural gala, hosted by Sarah Arison and Agnes Gund.

“Gossip Girl” actress Szadkowski and modern dancer Desmond Richardson welcomed guests into the space for a seated dinner and series of performances by alums of the organization, which was founded in 1981 by Arison’s grandparents, Lin and Ted Arison.

“I went to an event with my grandmother when I was 19 and I was blown away,” Arison said, clad in a Swarovski Rosie Assoulin rainbow sparkler of a dress (Swarovski sponsored the evening, alongside Max Mara). “I said ‘Grandma, I want to help’. I joined the board and 12 years later, here we are.”

“I’m newly involved with the organization,” Casey Fremont said. “I went during Art Basel to see their Isaac Julien installation which was really my first exposure to the organization and what they do and how they nurture artists.”

Between courses, guests watched performances by, yes, a tap dancer as well as a cellist, pianist, drummer and several vocalists.

Art patron Gund shared the stage with Arison to thank the audience for coming in support of the anniversary and the inaugural benefit. “I’ve never gotten credit for something that I’ve done less for,” she said before adding with sincerity, “My happiness tonight, our happiness tonight, I think, is being here for the ambitions of the very young artists. If it weren’t for young people, I wouldn’t be able to do the things I do. I hope that you leave here energized.”