The French beauty brand took to east London Tuesday night to celebrate Delevingne as its new face of makeup. 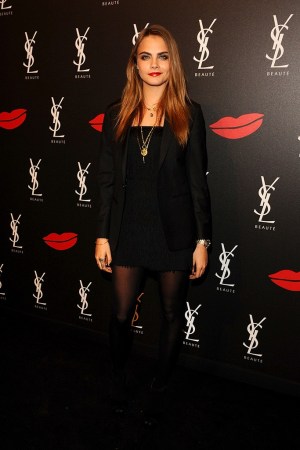 Cara Delevingne made a grand entrance into East London’s Boiler House as only she can.

Yves Saint Laurent Beauté was throwing a party Tuesday night in her honor as the house’s new face of makeup, and her walk was beamed onto a giant screen, mimicking her appearance in one of the new ads.

Ostensibly, the model’s contribution to the brand is her influence on social media. Still, she couldn’t quite believe she’d gotten the gig, thanking the brand “for hiring my crazy ass.”

The model was surrounded by Team Delevingne — sisters Poppy and Chloe and father Charles. “All I know is I am here for my baby sister — we thought we would rally around as a family and come in and have fun,” Poppy said.

After a preview of the new YSL Beauté campaigns, the Northern Irish band Southern played a raucous set, while Cara posed for endless selfies with admirers.