House has tapped the principal dancer of the New York City Ballet for its new men’s fragrance, L’Homme Libre. 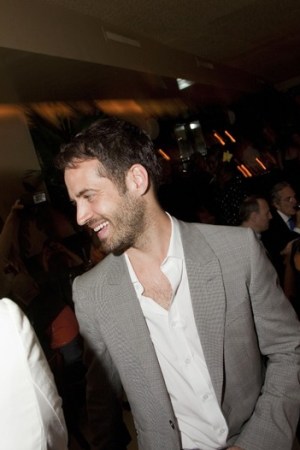 Benjamin Millepied was at the end of the bar at Indochine on Wednesday night, laughing a little when he considered how he came to his latest career move.

“It wasn’t one of my preoccupations at all,” said the New York City Ballet principal dancer and soon to be face of Yves Saint Laurent’s new men’s fragrance, L’Homme Libre. “It’s something I never really thought of. The positive thing about it, I think, is I’m a dancer and it’s not usually the sort of thing… It’s always actors or models.”

Though Millepied’s ads won’t bow until the fall, the house and designer Stefano Pilati were holding a dinner to celebrate its newest spokesman. A host of more seasoned models, including Arizona Muse, Liya Kebede, Chanel Iman, Lindsey Wixson and Elisa Sednaoui stopped by to celebrate, as did other guests including Harley Viera Newton, Leigh Lezark, Victoria and Vanessa Traina, Chiara Clemente and Patrick Demarchelier.

Millepied’s fiancé, Natalie Portman, who is very pregnant with the couple’s first child, was a notable absence. The dancer did say he was able to glean a few ideas of what to expect from his new gig from watching her recent turn as the face of Miss Dior Cherie.

“I learned a little bit or got a taste of it as I watch her through her commercial and her campaign,” he said.

And was he as prepared for his impending fatherhood?

“Yes, yes, yes,” he said. “As prepared as I could be, but looking forward to it very much.”