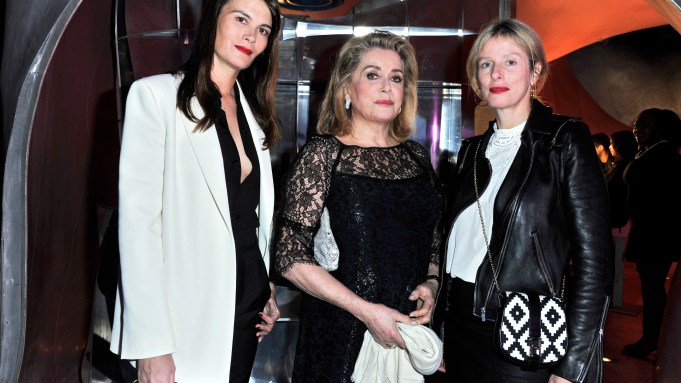 MY PARIS: The new Yves Saint Laurent women’s fragrance Mon Paris pays homage to vertiginous love that makes people lose their senses. So, fittingly, its launch party Tuesday night was held at Georges, the restaurant perched atop the Pompidou Center with panoramic views spanning the City of Light.

Catherine Deneuve, who was among attendees at the L’Oréal-hosted event, said she is filming “Tout nous sépare,” directed by Thierry Klifa. The actress called the movie, in which she plays the mother of Diane Kruger’s character, “rather noir.”

Beaubourg, the neighborhood in which the Pompidou Center stands, is considered by Canadian singer-songwriter Béatrice Martin — aka Coeur de Pirate — as one of the most romantic parts of Paris.

“I’m touring in Europe,” she noted.

Charlie Le Mindu had a much more unconventional pick for his preferred romantic haunt.

“The catacombs,” he said.

The maker of madcap hair creations is readying a new show for singer and actress Élodie Frégé at the Crazy Horse cabaret.

“I am also working an exhibit not far from here,” he teased, adding that his “Charliewood” multidisciplinary revue, which had been staged at Paris’ Palais de Tokyo this spring, is set to travel Stateside, starting at Art Basel Miami.

YSL’s international makeup artist Lloyd Simmonds has yet a different take on what’s romantic in Paris.

“It’s a thing that you do [here], which they call in French ‘flâner,’” he explained. “You just stick your hands in your pockets and wander, and let whatever happens happen. You always run into something fabulous, something beautiful. That’s the romance here for me. It’s just everywhere.”

Guests, which also included Karin Viard, Marina Hands, Blanca Li, Iman Perez and Jean-Victor Meyers, ended the evening with a set performed by Lilly Wood and the Prick. The alternative band jammed for a half hour, winding down the evening with its hit song “Prayer in C.”