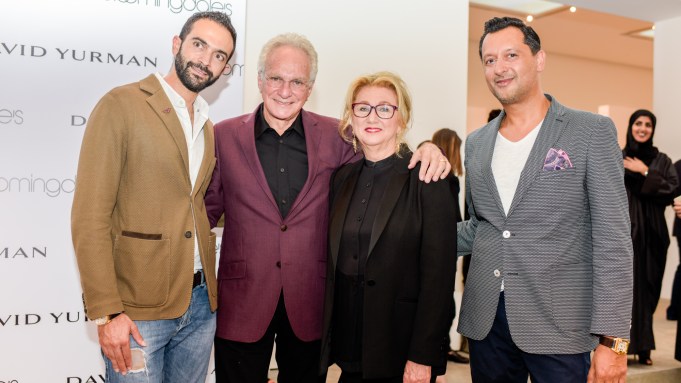 DUBAI — It was a celebration of “Love, Work, Life” at a special retrospective exhibition at the Leila Heller Gallery here this week, pulled together to commemorate the launch of David Yurman’s first stores in the region.

Hosted by Khalid Al Tayer, chief executive officer of the Al Tayer Group, the Yurmans’ partner in the region, the exhibition gave guests a look at some of the brand’s archival jewelry pieces, as well as never-before-seen footage and images of the Yurmans living and working in the West Village in the Sixties and Seventies, when both were young artists.

Welcoming the Yurmans to the region, Al Tayer said, “We were so happy to finally be able to get some of the most creative talent from New York here to our amazing city.”

The Yurmans, who had never seen all the footage and photos compiled, were awestruck. “This is awesome,” remarked David. “It’s amazing. I’ve never seen the history of our life all together like this,” added Sybil.

A nostalgic Sybil recalled the couple’s early years together and how that influenced the brand. “When David and I were young we used to go to the Metropolitan museum. We had no money so that’s where we used to have our dates, with hardly anyone there,” she said. “We would look at the ancient Roman bracelets that were twisted. That was a lot of the inspiration for the bracelet.”

One video from the early Eighties showed David hand-making one of the first rope bracelets. “We introduced them in 1982, the year our son was born. But each of those bracelets would take so long to make, and he would be up all night working,” Sybil recalled.

Addressing guests at party, Yurman said he was pleased to finally have cemented a nine-year friendship with Al Tayer into a partnership. And true to the theme of love, he called wife Sybil to stand with him as he took the microphone. “I just feel more comfortable when she’s with me. We did this all together.”

The emotions of the night spilled over to guests as well, many of whom left surprised by what they had discovered about the couple behind the American brand. “They are incredibly humble and down-to-earth and inspiring,” said Alaa Al Shroogi.

Of course it was the jewelry that ultimately did the talking. Remarking on the drama of his simple statement pieces, Dubai-based lawyer Natalia Shustova playfully flashed a pavé Yurman pinky ring and said, “I can transform into whomever I want to be just by adding this one little element.”