If Yves Saint Laurent execs want a new generation to embrace its iconic Seventies fragrance, Belle D’Opium, they made that clear at the perfume’s relaunch. 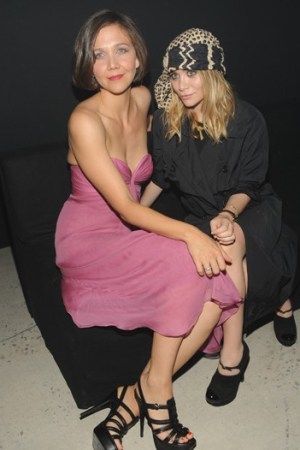 If Yves Saint Laurent execs want a new generation to embrace its iconic Seventies fragrance, Belle D’Opium, that much was clear at the perfume’s relaunch on Thursday night.

An impressive cast of young celebs, including Ashley Olsen, M.I.A. and Maggie Gyllenhaal were on hand for the bash, held at a Midtown event space that organizers transformed to resemble a dark Parisian boîte, replete with Cirque du Soleil-style entertainment such as fire-breathers and contortionists. (Other, less official spectacles included Whitney Port filming her MTV reality show “The City” in the middle of the dance floor and spotting Billy Joel’s daughter, Alexa Ray Joel, standing five feet from his estranged wife, Katie Lee.)

It seemed the party was a good idea, since when it comes to Opium education, the crowd had some catching up to do. “When Opium came out, I wasn’t born yet,” said 28-year-old French actress Mélanie Thierry, who appears in the product’s commercials.

Fortunately, Alexa Chung, there to DJ and because “I like smelling good,” got a crash course in the fragrance’s history minutes before the party’s start. “But I think the woman got her facts wrong, because she was like, ‘These are all the original posters.’ And I was like, ‘No, that’s not, that’s Sophie Dahl.’”

In fact, Gyllenhaal was one of the few attendees who, at 32, was old enough to actually remember the original Opium (which was released when she was one year old). But the actress, who already had hit two major fetes last week, was in no shape to educate fellow revelers. “My husband is away and my daughter is out of school, so I have her all day. We went to the dentist early this morning,” she said. “I’m so tired.”