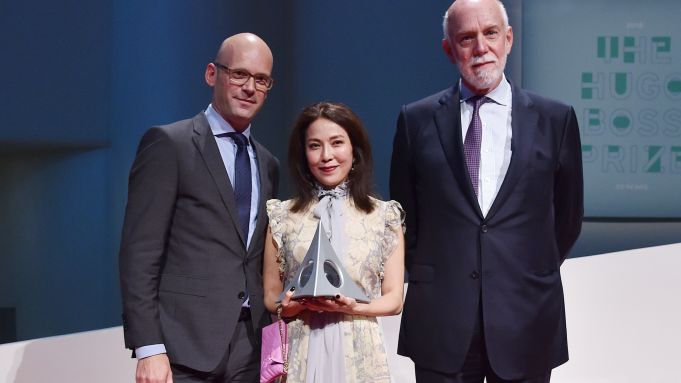 Besieged by friends with outstretched arms, Yi described her own reaction as “sheer elation and surprise. I don’t think I can calculate it to one moment.”

The conceptual artist who works in fragrances had reason to let loose. In its 20th year and administered by the Solomon R. Guggenheim Foundation, the $100,000 paycheck includes a solo exhibition at the Upper East Side museum. Her win left runners-up April Tania Bruguera, Mark Leckey, Ralph Lemon, Laura Owens and Wael Shawky in the maybe-next-year category. While drinks were ordered and Harley Viera-Newton DJ’d, the conversation inevitably turned to art with lines like, “I went to Alex Katz’s for art yesterday.”

Bosworth, who plays a femme fatale art dealer in “The Art of More,” had joked with Wu en route to the party about the irony of their destination. With a studied view of the New York art scene, she said, “What’s interesting to me is the perception of value. It’s relative, really, if someone responds to art or not. That value, that monetary value, or really standing the test of time is just based on other people’s opinions. An artist may never even see that success — like Van Gogh never saw that until long after his death.”

In April, visitors to the Guggenheim will be able to take in Yi’s work, which in the past has involved boiling shredded Teva sandals in recalled powdered milk among other things. She works with some really unique materials and deploys them in very compelling ways, really activating all of your senses notably smell. She’s really interested in organic materials, biology and then redeploying them in ways that are both psychologically and politically charged.

The Guggenheim’s director Richard Armstrong, Hugo Boss chief executive officer Mark Langer and the company’s recently installed chief brand officer Ingo Wilts were on hand to show their support. In the 20 years since the Hugo Boss Prize was created, the alliance has helped the German label reach a more sophisticated audience while simultaneously giving its design team new ideas and inspiration. “When we started, it was more of a men’s brand doing suits and sponsoring Formula 1 races,” a company spokeswoman said. “Today contemporary art is chic.”