January Jones, Miranda Kerr and Minka Kelly partied with the designers at the store opening. 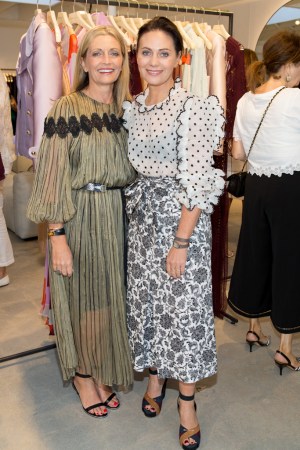 Nicky and Simone Zimmermann timed the opening of their new Melrose Place boutique well. The celebration they threw on Wednesday night allowed them to escape winter in their native Australia and enabled guests to, well, get in the swim of things.

“It’s a bathing suit and a skirt,” declared Minka Kelly of her form-fitting two piece ensemble. “It was so hot. And it is a summer party.” Meanwhile, Miranda Kerr, who opted for a blousy, blush-hued sundress, waxed nostalgic on the other side of the 3,000-square-foot space.  “They were one of the first designers that I ever worked for,” she recalled. “The Zimmermann prints are so iconic and original. They’re feminine and effortless. I’ve grown up with them,” she said, noting she was “probably 16 or 17” when she first walked in the swim and ready-to-wear label’s Sydney show. Nicky Zimmermann remembers the time well. “It’s really nice to reconnect,” she said. As for the brand’s new location, her sister Simone said, “We’ve had our eye on this spot. We’re always looking for something that’s true to its surroundings. It looks very L.A.”

After cocktails, a smaller group — including Kerr and January Jones — made their way to the boutique’s outdoor patio where an alfresco dinner awaited. Following a busy summer with trips to Utah and Hawaii, Jones said the dinner was one of her last nights off. In two weeks, she’ll return to set for season two of her new show “The Last Man on Earth” with rumored beau Will Forte. “It’s so awesome,” she said of his Emmy nomination. “Very deserving.” As for the final nom for “Mad Men”? “I’m proud of the show and I hope it gets recognized for this last go around. Then we have the Globes and SAG Awards. We’re just trying to drag it out as long as possible,” she cracked.