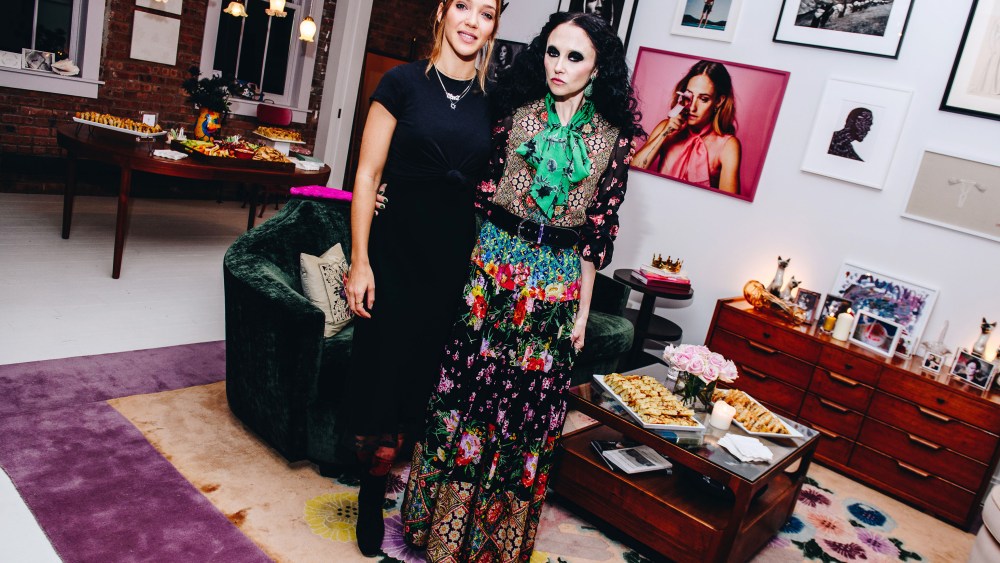 “I have this ridiculous idea that art should just be for everyone, and everyone should get to enjoy art and it shouldn’t be this exclusive thing,” Zoe Buckman told the intimate group huddled inside her live-work art studio in DUMBO on Wednesday night. The artist had only moved in 10 days prior — on New Year’s Day — and was already showing off her new, window-lined space, decked with many of her installations. In one corner, mobiles of silky-white boxing gloves hung off silver chains from the ceilings; in another, vintage lingerie embroidered with hip-hop lyrics were suspended above a spread of crudites and bites provided by the Smile chef Melia Marden.

The true centerpiece of the evening was a framed limited-edition embroidery of “Champ,” her soon-to-be-installed public sculpture installation in collaboration with the Art Production Fund. The embroidery, which is raising funds to support the public work and related programming, depicts a uterus — with a pair of boxing gloves taking the place of ovaries. The sculpture, which will be installed at The Standard hotel in Hollywood, will be a 43-foot-tall glowing neon and fiberglass version of the image, inspired by Buckman’s time spent in the boxing ring.

“For me, boxing was a way of me exercising my frustration, anger, sense of injustice, but also a way of owning my space and taking up space,” she explained of the activity, “which I think as a woman in the art world is essential for surviving. You have to become comfortable going like, ‘OK, I’m going to take this wall, this wall is mine, I’m going to put my work on this wall.’ Boxing was really cathartic for me,” she continued.

The piece, which she began designing in the run-up to the 2016 presidential election, will be unveiled in West Hollywood in late February in time for Women’s History Month, International Women’s Day and the Oscars.

“I guess the chips are falling in place nicely for the timing of this,” Buckman added. “When I made ‘Champ,’ I knew specifically what it as about for me: it was about the fact that [female] rights were under threat, there was a war on us. But it was also about all we have to celebrate, and just how astonishing it is just being a woman, and about the fights we win on a daily basis, and on a global scale. For me it was this celebratory piece, that was also about difficulty.”

The artist noted that, as far, they’ve only had one male buyer for the Champ embroidery edition, and cajoled the room to spread the word.

“I just said it’s totally going in Eric Eisner’s office,” chimed Stacey Bendet. Her contribution goes well beyond picking up a new piece of artwork for her husband; the Alice + Olivia designer has lent enthusiastic and critical funding for the installation, and has also collaborated with Buckman on an accompanying charitable capsule collection of sweatshirts and related wares.

“When [Buckman] started the Champ project, I just felt the way she was going about opening up discussion and communication about women’s issues, about empowering women to discuss how they feel, what they’re going through, how they feel about their bodies, in a way that wasn’t political or overly antagonistic of men, I thought was so cool,” Bendet said. “I think for all of the pain people felt from the election and everything after, what’s come from it has been a true moment of strength. It’s created so much change.”

“With everything that keeps happening, I think we’re all just being so encouraged that this is a piece that really needs to be out in public and to spark those conversations that we really need to have,” she said.