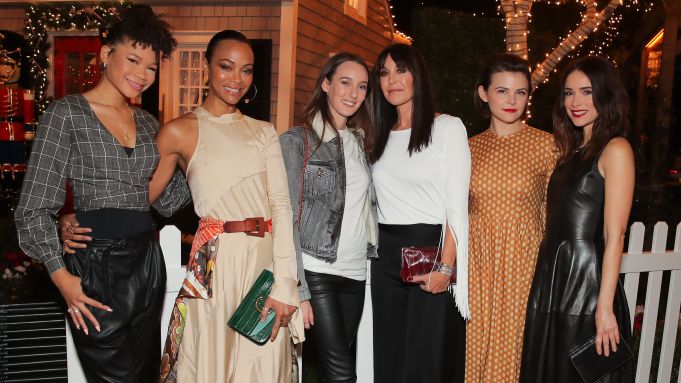 Tamara Mellon had something else in mind to mark the opening of her first brick-and-mortar store, in Palisades Village, on Tuesday. Specifically, “sushi and a dance party.” After all, her sexy stilettos were made for disco nights — or fashion awards galas, as Meghan Markle, the Duchess of Sussex, proved when she donned a pair of strappy gold sandals at Monday’s British Fashion Awards.

Saldana called it a “date night” with husband Marco Perego, and spent the beginning of the party in a booth with Mellon and Mike Ovitz and Kris Jenner and Corey Gamble.

Although Mellon wasn’t expecting to sell any shoes that night, Storm Reid insisted on seeing the store and even danced around it as the music could be heard from a few doors down.

But even after the music stopped, the party wasn’t over. Stylist Jason Rembert came straight to the Palisades — not an easy commute by Los Angeles standards — after presenting at the fashion awards in London. He wasn’t the only stylist in attendance — Elizabeth Stewart, who that morning hosted a breakfast for 11 Honoré, George Kotsiopoulos and the team of Wayman Bannerman and Micah McDonald also made it out.

“We’re trying to get all our fittings done by Dec. 18,” Bannerman said of styling client Regina King, who is a double Golden Globe nominee and also bound for the Palm Springs International Film Festival on Jan. 2. “You know if you don’t at least try those dresses on now, there’s no way you’re gonna get them tailored in time.”

“Let’s hope nobody tells you all the dresses have to be black a week before the show,” Bannerman said of last year’s last-minute switch-up for Time’s Up. “Or time would really be up.”