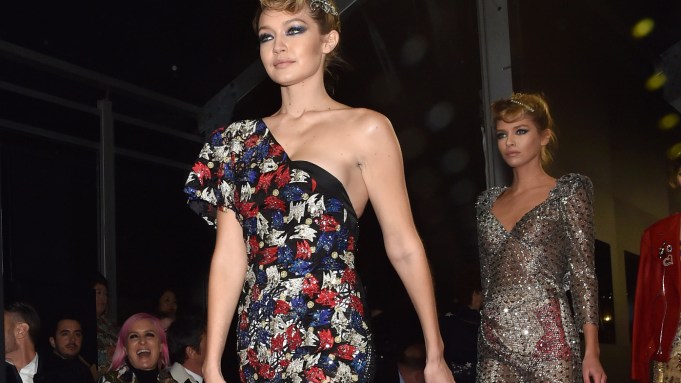 There’s one guarantee that comes with the world premiere of “Zoolander 2”: really, really ridiculously good-looking people will be there. On Tuesday night at Lincoln Center, Gigi Hadid started the parade of hotness, stomping down the step-and-repeat-cum-runway in an embroidered Marc Jacobs column dress, flashing her best “blue steel” to a huddle of photographers. Imaan Hammam, Stella Maxwell, Irina Shayk and other models of the moment followed suit. But none could steal the show from the movie’s beloved stars, who closed the show. Ben Stiller, Owen Wilson and Will Ferrell sashayed down the carpet-runway in character, accompanied by new castmember Penélope Cruz, who plays swimsuit-model-turned-Interpol-agent Valentina Valencia. Naturally.

Hanneli Mustaparta, Bryanboy and Valentino designers Maria Grazia Chiuri and Pierpaolo Piccioli sat in the makeshift front row, iPhones in hand, ready to capture the cult characters’ runway saunter for Instagram and Snapchat. But for all the outpouring of love, Stiller took the stage before the screening to remind the audience, “I think we probably would have made a sequel right after the first one came out…if anybody had wanted it. But nobody really went to see [‘Zoolander’]. It’s very easy to make a sequel to ‘Transformers,’ a movie that makes a gajillion dollars. It really takes real cojones to make a sequel to a movie that grossed so little money the first time around.”

Box office dud aside, everyone in attendance was more than excited to see the sequel — even if it was simply because they had a cameo in the movie. “I was sure they had the wrong Tyson,” said Neil deGrasse Tyson, host of “Cosmos,” who appears briefly in the film. “There’s Tyson Beckford…[I thought] maybe that’s who they meant and the production assistant got the wrong phone number. Turns out it was real, and I saw the script and it was a moment when the lead characters are contemplating the universe. And I thought, ‘Ah, I can help them out.’ Plus, it involved a trip to Rome, and you can’t say no to that.”

Other actors were returning to a role, like Nathan Lee Graham, who plays Mugatu’s oft-abused personal assistant, Todd. “At first I thought, ‘Is this a joke? Is someone joking with me?’” he recalled, when hearing the news that there would finally be a second movie. “And then I thought, ‘I better hit the gym right away.'” And in case you’re wondering about the status of poor Todd: “He is still getting lattes thrown in his face, 15 years later,” confirmed Graham.

The premiere had attendees ruminating on the old Derek/Hansel feud. “I feel like I’m in a split marriage, I would go menage a trois,” said Alexander Wang, when asked to pick a side.

Others had a more definitive answer.

“Derek! Are you kidding?” Tommy Hilfiger said. “Blue steel all the way.”