Roach looks back on the decade of dressing one of today's biggest style stars, from their first meeting when she was 14 to major red carpet moments at 24.

Zendaya has grown into a name immediately associated with fashion dominance amongst the Hollywood set, but there was a time when she was a 14-year-old girl, on her way to a movie premiere and looking for help in what to wear. Enter Law Roach, trademarked Image Architect to the stars who is celebrating a decade of working with Zendaya, Disney kid turned bona fide style star.

“When she was 14, she didn’t know much about fashion, and we were starting to learn about each other. And I think I had a little bit more say-so in the look,” Roach says over the phone. “But now she’s a grown woman. I think she’s grown, not only the way she chooses and collaborates with me, but in everything. She’s a woman now.”

The two first met when Roach was visiting L.A.; he’d been working as a personal shopper for a family friend of Zendaya’s, and she needed help getting ready for an event.

“And she came in and we spoke and then we just made this really beautiful connection,” Roach says. “We went shopping, and we’ve been together ever since.”

Roach’s highlights of their fashion decade together include the hot pink breast plate top and matching skirt from Tom Ford she wore at the 2020 Critic’s Choice Awards; the butterfly Moschino dress for “The Greatest Showman” Australian premiere in 2017; cream draped Vivienne Westwood at the 2015 Oscars; emerald green Vera Wang at the 2019 Emmys, and the two-tone Christopher John Rogers worn for the 2020 virtual Emmys, at which she won.

“It doesn’t seem like 10 years at all. We’ve had a lot of looks and a lot of moments over this decade and every time seems just as magical as the first,” Roach says. “I think the process has become easier, and we know each other like the back of our hands. I’ve been very blessed to be a part of the curation of her style and her fashion identity. We call each other our fashion soulmates. She calls me her fashion godbrother. It’s just such a beautiful, easy thing. There’s a lot of trust.”

In addition to becoming a darling of major European brands (she’s the new face of Valentino, for one), Zendaya and Roach are proud of their relationships with various emerging brands, which Roach says has been a directive since Day One.

“We’ve been able to build out our careers using emerging and independent smaller brands and designers. Because I think when we first started, we were looked at as emerging…so that’s how it was,” Roach says. “If you look at the things she wears, she still wears a lot of independent, emerging designers. Peter Do, Christopher Esber, Christopher John Rogers. We stick to that identity because it’s worked for us and it actually feels really good.” 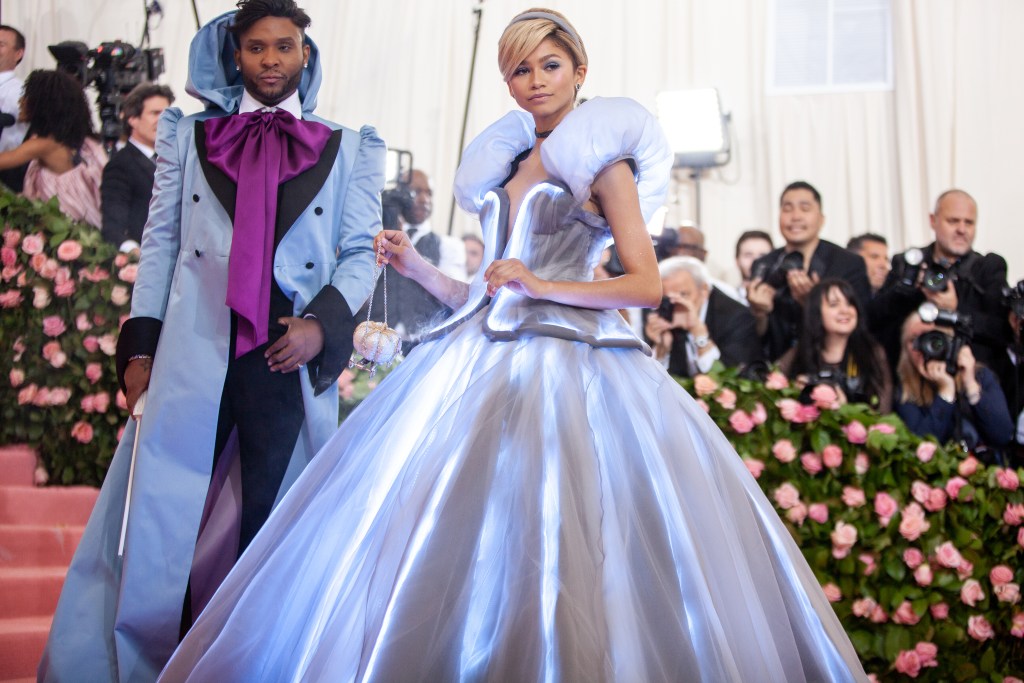 He says it’s been exciting for them to watch these emerging brands make it big over the years, sometimes due to Zendaya wearing their designs.

“We’ve seen after she wears them, brands go to compete for the LVMH Prize and be included in the CFDA. So there’s been a few over the years that we are super proud of, that we broke.”

In addition to dressing her for the red carpet, Roach has styled Zendaya for many an editorial spread, most recently her GQ cover in which he dressed her in all men’s wear.

“I always try to figure out another way to present her. GQ is a men’s magazine and when women are on it, or featured in the magazine, it’s usually always really sexy to appeal to the male gaze,” Roach says. “For this, I thought it would be really interesting to shoot her…you know, she has a tomboy side of her. She played basketball when she was younger, so I thought it would be really interesting to show the world a little piece of that side of her. Instead of shooting her for the male gaze, shoot her in men’s wear to play against the more tomboy side of her. They’re super relaxed. She’s wild hair, basketball shorts, t-shirts when she’s home. So I wanted to give the world a little peek into that part of her personality.”

Though his client has become a household name in the 10 years he’s been working with her, Roach says their dynamic hasn’t changed much at all.

“It’s always been a collaborative effort between her and I. We always choose the things that give us goosebumps,” he says. “But she is a little more determined that she gets what she wants.”