On Feb. 6, Carter will open IMG’s New York Fashion Week in conjunction with Harlem’s Fashion Row, with a display of 45 costumes spanning her career. "I haven't really gotten fashion opportunities," she says. 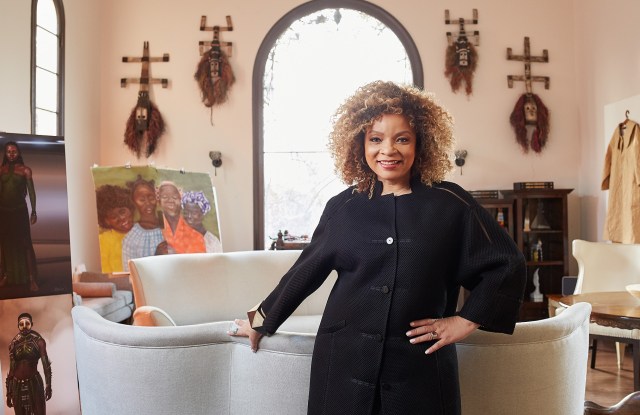 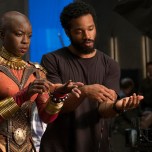 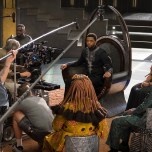 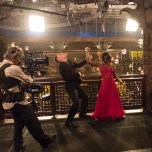 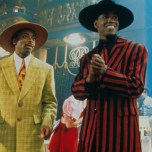 For 35 years, costume designer Ruth Carter has helped define the look of the black experience on film, from everyday foot soldiers of the Civil Rights and racial equality movements in “Do the Right Thing,” “The Butler” and “Selma” to epic real-life heroes in “Malcolm X” and “Marshall.” Her work envisioning a new African diaspora for Marvel’s $1.3 billion hit “Black Panther” has led to her third Oscar nomination for best costume design and a new level of visibility on the awards circuit — and in the fashion industry.

“We needed this for the black community after Black Lives Matter, Trayvon Martin and all of the killings. We needed ‘Black Panther’ to swoop down and change some s–t,” she says during an interview at her Mid-City L.A. home, decorated with Dogon masks and other African art, as well as her own costumes and sketches.

“But I’m ready for all the fanfare to die down,” she admits, padding around in bare feet, heels kicked to the corner. “Some stranger rang my doorbell the other day and asked if Ruth Carter lived here.”

Alas, it’s not dying down anytime soon. On Wednesday Carter will open IMG’s New York Fashion Week in conjunction with Harlem’s Fashion Row, with a question-and-answer with stylist Ibrahim Kamara, and a display of 45 costumes spanning her career, including outsize Zoot suits worn by Denzel Washington and Spike Lee in “Malcolm X” (1992), stage looks from Angela Bassett’s turn as Tina Turner in “What’s Love Got To Do With It” (1993), the much-imitated “Bed-Stuy Do or Die” T-shirt sported by the late Bill Nunn as Radio Raheem in 1989’s “Do the Right Thing,” and recreations of some of the colorful, tribal-tech looks from 2018’s “Black Panther” starring Michael B. Jordan, Chadwick Boseman and Lupita Nyong’o.

It’s the second time IMG has hosted a “Black Panther”-related event during fashion week. The first, in February 2018, was organized with Marvel featuring looks inspired by the film from fashion designers Sophie Theallet, Chromat, Fear of God and more. This one is giving the spotlight to the woman who created the Wakanda aesthetic in the first place.

Although Carter follows fashion, “I haven’t really gotten fashion opportunities,” she says, referencing the kind of movie and TV tie-in collections fellow costume designers Colleen Atwood, Trish Summerville and Janie Bryant have had with HSN, H&M, Banana Republic and others.

Over the years, Carter, 58 — whose personal wardrobe includes a lot of graphic shapes, black-and-white, crisp shirting and statement coats from Ralph Rucci, Maison Rabih Kayrouz and The Row — has only been to one fashion show. “I’ve never been invited. Well that’s not true; When I was doing ‘Shaft,’ Armani flew me and Samuel Jackson on his private jet to Milan.” (For what it’s worth, it’s Jackson, out of all the actors Carter has worked with, who is most enamored of clothing, she says.)

“I really wanted to do a capsule collection with ‘Black Panther’ for H&M or Uniqlo, using patterns from Africa reconfigured onto hoodies and caps,” she continues. “But the film wasn’t proven. Everyone I went to said, ‘I’m sorry.’” (Although Carter was not involved in it, Forever 21 did have a Marvel-licensed collection of “Black Panther” merch, and got backlash for showing one of the sweaters on a white model on its web site.)

In theory, costume designers serve a script, helping to create characters, not commercial merchandise. But Carter believes they share common ground with fashion designers, especially now that Alessandro Michele at Gucci, Virgil Abloh at Louis Vuitton and others are not just creating collections, but narrative-driven campaigns, performances and films. “We share a love of the story; their story is ‘who wears my clothes’ and our story is ‘who is this person in this world and environment,’” she says.

One of eight children, Carter grew up in Springfield, Mass., and came to costume design through a love of theater. At Hampton University, after she didn’t get cast in a play (a modernized version of Molière’s “The Would-Be Gentleman”) she was asked to design the costumes, and it took. She also configured her own costume design major because the college didn’t offer one. “When I graduated, I was afraid I’d designed something that was unusable,” she laughs.

After completing an internship at the Santa Fe Opera, she drove her VW Rabbit to L.A. and started as a backstage dresser for the Los Angeles Theatre Center, eventually working her way up to shop foreman. A chance meeting with then up-and-coming indie filmmaker Spike Lee at a dance performance led her to pursue film, volunteering to assist with student thesis projects at the University of Southern California. Months later, Lee called and asked her to do “School Daze” (1988), the first of many films on which they would collaborate.

“Coming into [Lee’s production company] 40Acres, letting him take the lead and be the big brother, you couldn’t help but feel that we were learning together,” she says. “He’d do a lot of things to connect us all on set, like hosting parties and sneaker jams where everybody had to wear Nike high-tops. It was a fun place to be. He also made you feel like you were doing something for the culture, to uplift the race. You were taking a political stance, imploring the Afro future, the Afrospora, the aesthetic of Africa. It defined me.”

Eventually, she built a network of directors. “I didn’t have to look for jobs, it was the burgeoning of the new black filmmakers, the early Nineties, and when Spike was done with a film, Robert Townsend was ready to prep. I did two-and-a-half films a year for 10 years and that’s how I cut my teeth. All of that theater training paid off because even if I didn’t know the medium as much, I knew how to get the job done.”

Unlike many costume designers, who don’t own much of their work because it belongs to the studios, Carter has been building her archives since her first film (she’s worked on more than 30), amassing 150 costumes. “Theater people save things,” she notes. “Back then, Spike let me keep anything I wanted, and if I didn’t, we also had big sales. If the clothes were contemporary, the cast and crew could buy them for 75 percent off. It was a free for all,” she says. “Now it’s different. Now much more value is put on costumes and people want to archive them. For 25 years, I was archiving and nobody cared.”

Out later this year, her next film, “Dolemite Is My Name,” stars Eddie Murphy as Rudy Ray Moore, “one of those lewd comedians who made albums parents used to play in the basement after the kids fell asleep,” Carter explains of the real-life performer, who created a flamboyant character called Dolemite in a series of B movies. “The period is 1970s, we shot it all last summer. It was super hot in L.A., and it was all polyester and big Afros. At least I didn’t have to wear it. But we tried to keep Eddie as comfortable as possible, and he had more costume changes than I ever put him in, something like 80 total.”

In the meantime, there are more red carpets to walk, including the Costume Designers Guild Awards, on Feb. 19, where Carter will pick up the Career Achievement Award, and the Oscars on Feb. 24, where she’s already thought of (but won’t share) the one person she will thank if she becomes the first African-American to receive the best Costume Design statuette.

“If I win, I hope I make it attainable and real for others,” she says. “Even I have had doubts.…But just study your craft, stay with it and you’ll reach it like I did.”