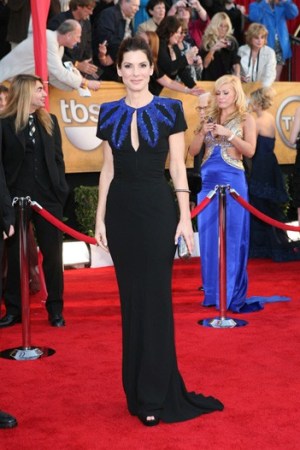 Sandra Bullock won the best actress prize at Saturday’s 16th annual Screen Actors’ Guild awards, dressed in black and blue Alexander McQueen. But some of her peers, maybe hoping to catch a bit of her luck, took a sartorial cue from her Golden Globe appearance in purple Bottega Veneta.

Tina Fey, Anna Kendrick and others walked the carpet at the Shrine Auditorium in varying shades of violet. The strategy worked for Fey, who took home a prize for her performance on “30 Rock.”

Another group, including Mariah Carey, Carey Mulligan and Sofia Vergara, opted for red, while Colin Firth’s wife, Livia Giuggiolo, went green—so to speak. “I’m wearing a dress made entirely of milk fiber,” said Guiggiolo, declining to name the designer. “I’m doing a challenge for Vogue, and going through the entire award season wearing only ecological fashion.”

“We’re on different missions,” added Firth, who was nominated for best actor for “A Single Man” but lost to Jeff Bridges for “Crazy Heart.” “I’m just here to promote myself. To smile and get attention.”